Named after the highway that links Detroit and the predominantly white suburban towns just north of it, 8-Mile is a 2002 film directed by Curtis Hanson and written by Scott Silver. Filmed over 2001, at which point it was merely named “Untitled Detroit Project”, the film started shooting in September in Highland Park, Michigan. It was only near the end of filming that 8-Mile was decided on as the film’s title, and the end credits assure the audience that it was “Filmed on location in the 313”, which is Detroit’s local area code.

The semi-autobiographical film follows Eminem’s character, a white rapper named Jimmy “B-Rabbit” Smith Jr. as he attempts to launch his music career. While he struggles to break into the African American-dominated genre of hip hop at first, he ultimately (SPOILER ALERT, I REPEAT, SPOILER ALERT) defeats the rival gang leader who threatened his life, Papa Doc, in a rap battle to end all rap battles. Seriously, it was that good. Apparently, these scenes were so tense and full of atmosphere when they were filmed that several people actually passed out on set.

Don’t lose yourself looking at maps of Detroit trying to pinpoint some of the famous cityscape locations that were chosen to shoot certain 8-Mile scenes, as we’ve done all the hard work for you. This article will walk you through some of the favorite spots from the film on a tour around Detroit.

It all begins at the 8 Mile Mobile Court, where Jimmy returns to live with his mom and sister after breaking up with his girlfriend. Previously the A&L Mobile Home Park before production transformed it into the court, the trailer park is still there today although it isn’t quite like how it comes across in the movie.

Depicted in the film as a drug and alcohol infested dump, the real trailer park is much less dingy. The popular tourist spot is a favorite for fans of the film, and it can be found right on the very road that the film is named after on 20785 Schultes Avenue in the suburb of Warren. 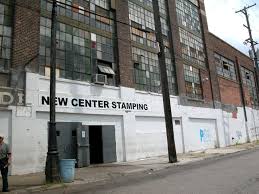 It was originally written that Jimmy’s character worked in a hotel as a bellboy carrying the bags of the rich, but in the edits, this was changed to a stamping factory where Jimmy clashes with his boss over overtime.

While his workplace might not be the most exciting location in the film (or generally in life, for that matter), it’s interesting that they filmed these scenes in an actual stamping plant called New Center Stamping. It’s still in business at 950 East Milwaukee Street on Hastings Street, Detroit if you wanted to check it out. 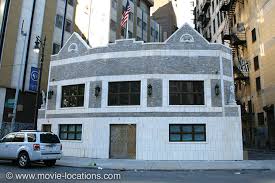 The building where Jimmy’s rap battles take place is set in a real venue called St. Andrews Hall. The Shelter is based in the basement beneath St. Andrews and it’s where Eminem started out in his early career, but surprisingly, they didn’t use this venue for the film.

Rather than filming here, the rap scenes (including the screw-ups, showdowns, and successes) were actually shot in a warehouse located at 240 Chene Street at the Rivertown Warehouse District, which is slightly further east. This is apparently because the club has scrubbed up too well since Eminem’s humble beginnings and it no longer fit the authentic, grungy vibes that Anderson and Eminem had in mind.

The exterior was also filmed elsewhere, namely outside 30 Clifford Street which underwent a serious makeover to provide the perfect look for the club’s face. To make things even more complicated, there was a third separate location for filming the scenes of the backstage area, which was the empty Rite Aid store at 1120 Griswold Street in the middle of downtown Detroit. 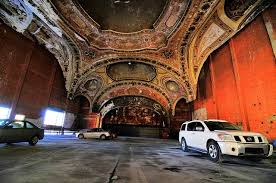 This now infamous scene was actually supposed to be lip-synced and Eminem was going to later write a “freestyle” verse that would have been added in, but, inspired by some of the other artists’ performances, the real Slim Shady had to stand up and show them how it’s done.

It was originally built in 1926 as the Michigan Theatre which could seat an impressive 4000 people. Like most concert-halls of the time, it didn’t survive the transition from grandiloquent theatre to Seventies nightclub and so closed before the decade was out. It was at this point that the building was turned into parking lots for the offices on the top floors. 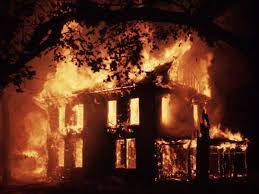 One of the films more poignantly political and controversially received scenes was the one when the Three One Third group sets fire to a house. It was the house in which a girl had allegedly been raped, so they burnt it down in order to send a message to others in the area.

The location was 122 Beresford Street in Highland Park, although permission to include this scene was refused at first due to concerns over the image of the city and how it would come across. However, eventually, it was agreed that it could be shown, and the film takes this opportunity to address the city’s lack of action regarding the vacancy. Brittany Murphy’s character and Eminem’s love interest, Alex, is a waitress at a local restaurant called ‘Intermezzo’ in the film. It’s only shot from the outside, and most of the scenes consist of Alex being picked up from work by Jimmy.  turned into a surface parking lot for the Little Caesars Arena.

Not far from where they filmed the ‘Shelter’ outdoor scenes, it’s just a few blocks east at 1345 Randolph Street. Unfortunately, it closed down after the film was made, so it’s no longer possible to visit the place where Brittany Murphy waited tables in the film. 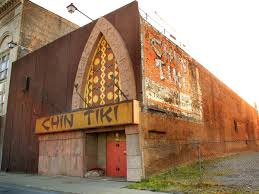 Once a Polynesian restaurant and club, the building where they filmed the Chin Tiki scenes had been abandoned and left empty for several years before it appeared in 8-Mile much revived.

The filming took place at 2121 Cass Street and caused the locals to speculate about a reopening of the popular club. However, if you were planning on paying it a visit, you’d be disappointed to find out that it was actually demolished in 2009, and it was subsequently turned into a surface parking lot for the Little Caesars Arena.

When you look at it on the map, it’s clear to see the physical ‘Eight Mile’ divide between Detroit and its white counterparts in the north. This is translated in the film to a racial and class divide, and each location used to shoot tells its own story of the struggles many people faced in these parts, while the film itself follows a white rapper’s attempts to get out of the ghetto.

The entire film showcases scenes of crackhouses, burned-down buildings, and vacant lots, the majority of which was shot in Detroit or “on location in the 313” as the end credits proudly claim at the end of the movie. It’s the perfect backdrop for this film, and now you know where each of these places exists in real life should you ever wish to visit them to pay it homage.