A Christmas Story (1983) has become a Christmas classic and one of America’s favorite traditions over the years, starring Peter Billingsley as youngster Ralphie Parker. Ralphie’s story begins as many Christmas stories do, he’s just a kid with a dream.

Unfortunately for Ralphie, what he wants most in this world is a forbidden Christmas present, and his desire for an official Red Ryder Carbine Action 200-Shot Range Model BB gun is thwarted.

When he is not dodging bullies, Ralphie is at odds with his cranky father and his worried mother. After a series of unsuccessful (and unsubtle) hints to his parents, Ralphie realizes that to get his dream gift, he’s going to have to ask the man himself, Santa Clause.

Upon visiting Santa at the local department store, Higbee’s, Santa agrees that Ralphie could “shoot [his] eye out” with his desired gift, and Ralphie is devastated.

When Christmas morning arrives, Ralphie opens all but one present. When his father asks him if he has received everything he wants, he shows him one last gift. They have surprised him with his dream present after all.

Partly based on Jean Sheperd’s semi-fictional memoir In God We Trust, All Others Pay Cash, this modestly budgeted comedy is set in the fictional town of Hohman, Indiana.

So where was this Christmas classic filmed? Although the majority of the external shots in A Christmas Story were filmed in Cleveland, Ohio, parts of the film were also filmed in locations in and around Toronto, Ontario.

Ralphie’s family home in the film was purchased in 2004 by a private developer, Brian Jones, who spent thousands of dollars renovating the house to look just as it did in the internal shots that were actually shot on a sound stage in Toronto, Ontario.

Jones helped raise the funds by selling the iconic leg lamp seen in the movie.

Dedicated fans of the movie can tour the Parker family home and the museum that sits adjacent to it which is home to a few of the movie’s props, such as Randy’s snowsuit and toys from the Higbee’s display.

You can even book a festive stay overnight to get in the spirit! 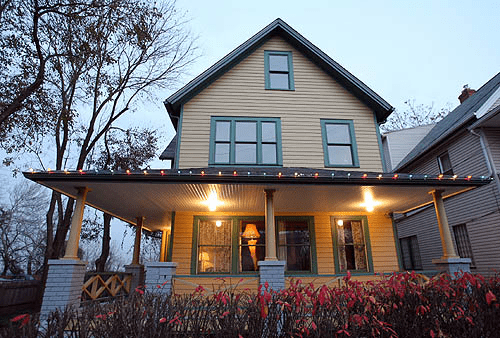 One of the primary locations in A Christmas Story was Higbee’s Department Store. This department store was the stage and backdrop for three of the film’s most iconic scenes, including the nostalgic parade scene we all know and love.

Originally, the director, Bob Clark, had yet to find a location that would allow him to film inside to make his Christmas movie a reality until he discovered the Cleaveland department store, Higbee’s.

It was agreed by R. Bruce Campbell, Higbee’s Vice President, that Clark could film at the department store and use the brand’s name provided the film did not contain any profanity.

This agreement was to ensure that the Higbee’s good, family reputation would be upheld not just within the movie, but after its reception, and would not damage future sales.

Clark and the producers agreed to Campbell’s request and edits, and so in the final cut of the movie, the Old Man’s grumbling that can be heard is in fact in lieu of the actual curse words that were originally written in the script.

Campbell welcomed the increased buzz and public interest that the film brought to Higbee’s and even offered that his employees would feed the crew, style the actor’s hair and makeup, build sets, and would play extras in the film.

Following the film’s success, its famous neon Higbee’s sign soon became something of a landmark before its final closure in 1992, whereby it operated as a Dillard’s for the next decade and was later developed into the Horseshoe Casino.

If you would like to visit the Public Square location now it is known as the Jack Cleaveland Casino.

Ralphie’s school, Warren G. Harding Elementary School, is a real school in Hammond, Indiana, and was the school of choice for the author, Jean Shepherd.

In the making of the film, Victoria School in St. Catharines, Ontario, doubled as the movie's Warren G. Harding Elementary School, and many of its actual students made up a proportion of the extras. The students that played extras even had their hair cut in a 1940s style to blend in with the actors!

Once the filming at Victoria School began, the weather did not cooperate with the crew and snowed heavily, making the filming conditions more difficult.

As a result, once the internal scenes inside the school were shot, the crew had to vacate to the sound studio in Toronto before they returned four days later to shoot the external shots at the school.

The children soon discovered that the movie business isn’t always glamourous whilst filming in freezing temperatures in Canada, although they still had a lot of fun shooting despite the cold!

While Victoria School has since closed, the building remains the same and is now home to a women’s shelter. 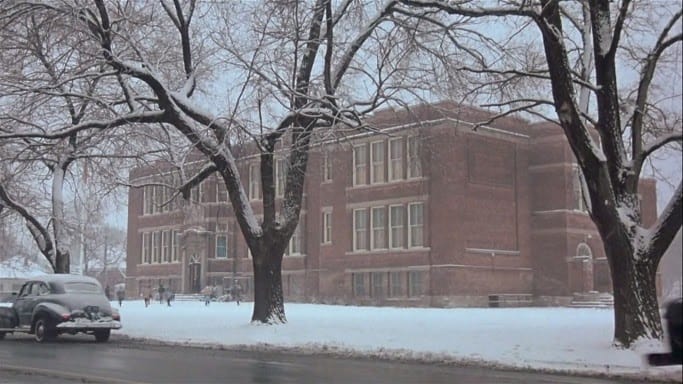 Victoria School as it appears in A Christmas Story, St Catharine’s, Ontario