Although the aptly named “Back to the Future Day” has been and gone, it’s never too late to enjoy this 80s family classic. You may recall that Marty McFly flew in the Dolorian along with Emmet “Doc” Brown to the future, or more specifically, October 21st, 2015.

Many assumptions were made about the year 2015 in this movie, with some proving to be quite accurate. For example, the first Back to the Future movie featured scenes of people racing around on hoverboards and sporting self-tying shoes.

Both of which have since been invented, although they’re not as commonly available as the creators predicted.

With the movie turning 36 next year, it can feel like we’ve all been suddenly thrust into the future. But regardless of how many years pass by, this classic feel-good favorite will always remain timeless.

The entire Back to the Future trilogy was filmed in California. This is also where the movie is set. However, the McFly family lives in a fictional town called Hill Valley. This oxymoronic location instantly sets the tone of the movie and prepares the viewer for the wacky comedic scenes that follow.

The opening scene of the movie introduces the main character, Marty McFly.

He’s hitching a ride on the back of a pickup truck that’s leaving a Burger King drive-thru, on a skateboard no less. This Burger King restaurant is located in Burbank, Los Angeles, and it’s still in operation today. 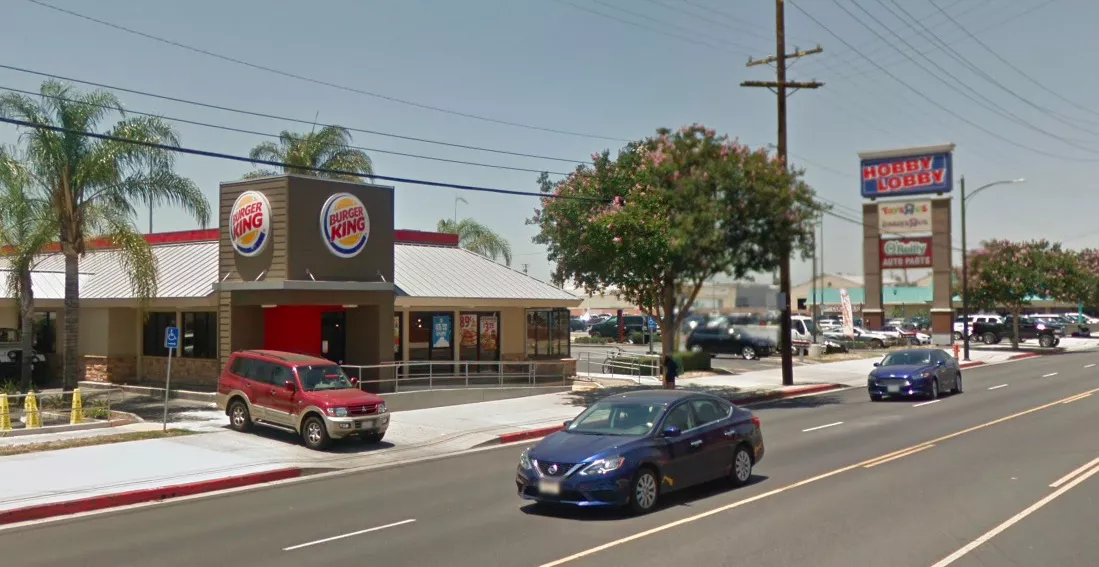 The scenes that follow show Marty arriving at Courthouse Square. Although it looks convincing, it’s not a real place. It’s a Universal City set where many scenes in the movie were filmed. This set wasn’t specifically built for this movie, it was built many years earlier.

It was used during the filming of To Kill a Mockingbird and its former name was Mockingbird Square - A* for creativity, Universal. This scene also features the iconic clock tower that Doc hangs from later in the movie. 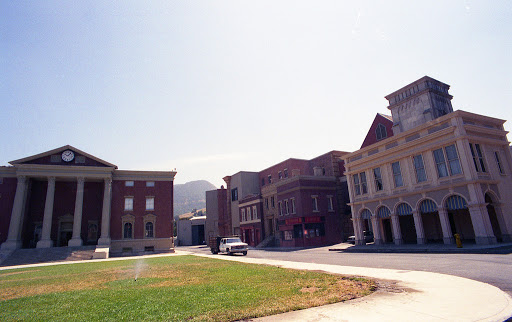 Although it’s not unusual that 17-year-old Marty McFly attended high school, Michael J Fox was actually 24 years old during the filming of this movie! In fact, he is three years older than his on-screen dad, Crispin Glover. 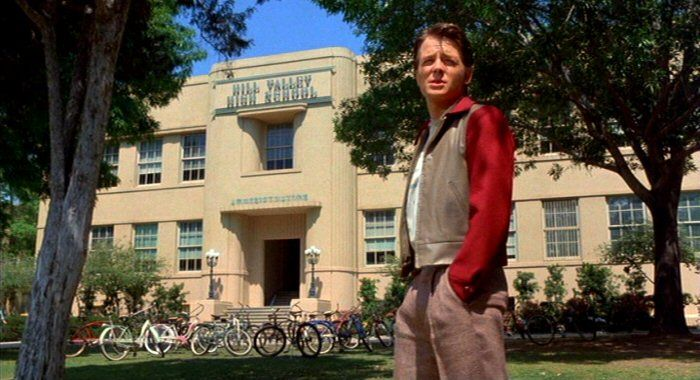 Nestled away in suburban Los Angeles is the Marty McFly residence. Scenes that included the outside of the house were filmed on Roslyndale Avenue in Arleta. The house was built back in 1954 and still stands today.

The small neighborhood was used to shoot various scenes in the movie, it has since become somewhat neglected and it’s often regarded as an undesirable area to live. 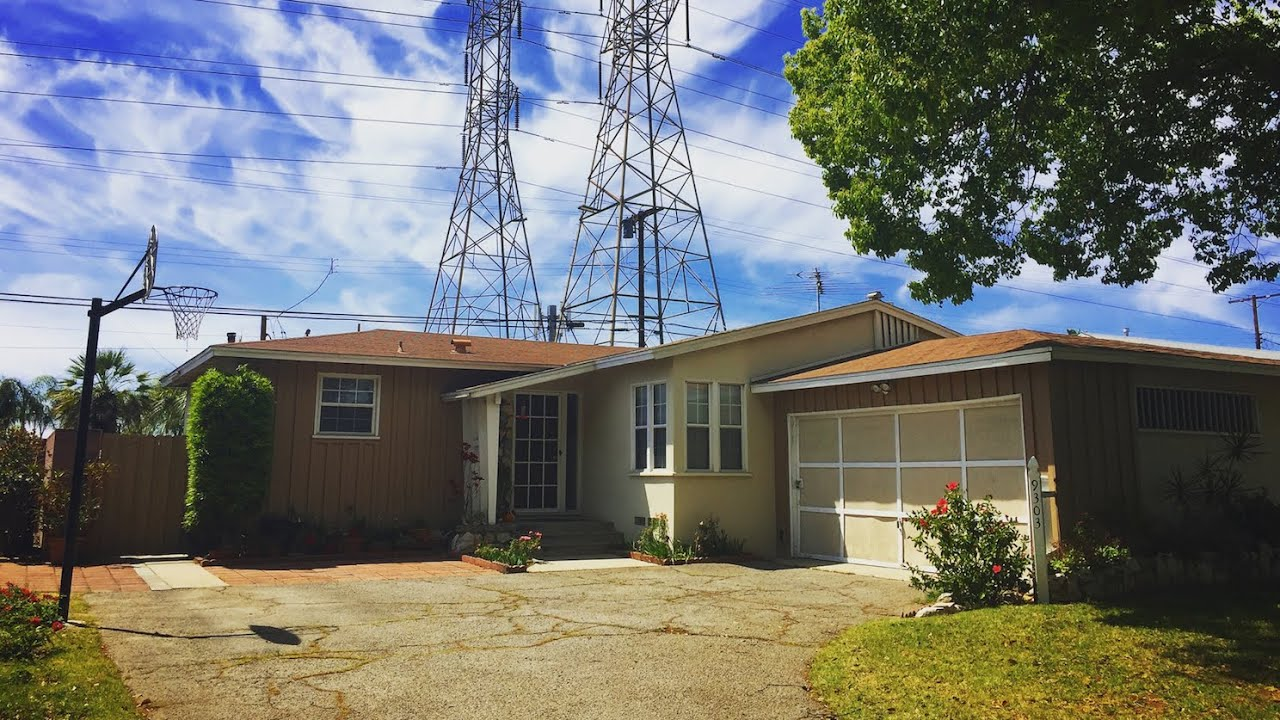 You may recall a few scenes where Doc and Marty are escaping a shootout and end up in a mall complex. These scenes were filmed at an actual shopping complex named Puente Hills Mall located in an area called Rowland, just east of the McFly residence.

Observant superfans may remember that the mall was renamed Twin Pines Mall in the movie. However, when they hop back to the 50s and find themselves at Mr.Peabody’s farm, Doc runs over a pine tree.

Although this doesn’t cause any devastating effects in the future, the name of the mall changes from Twin Pines to Lone Pine. Genius. The mall still stands today but looks a far cry from what it did when the movie was first released. 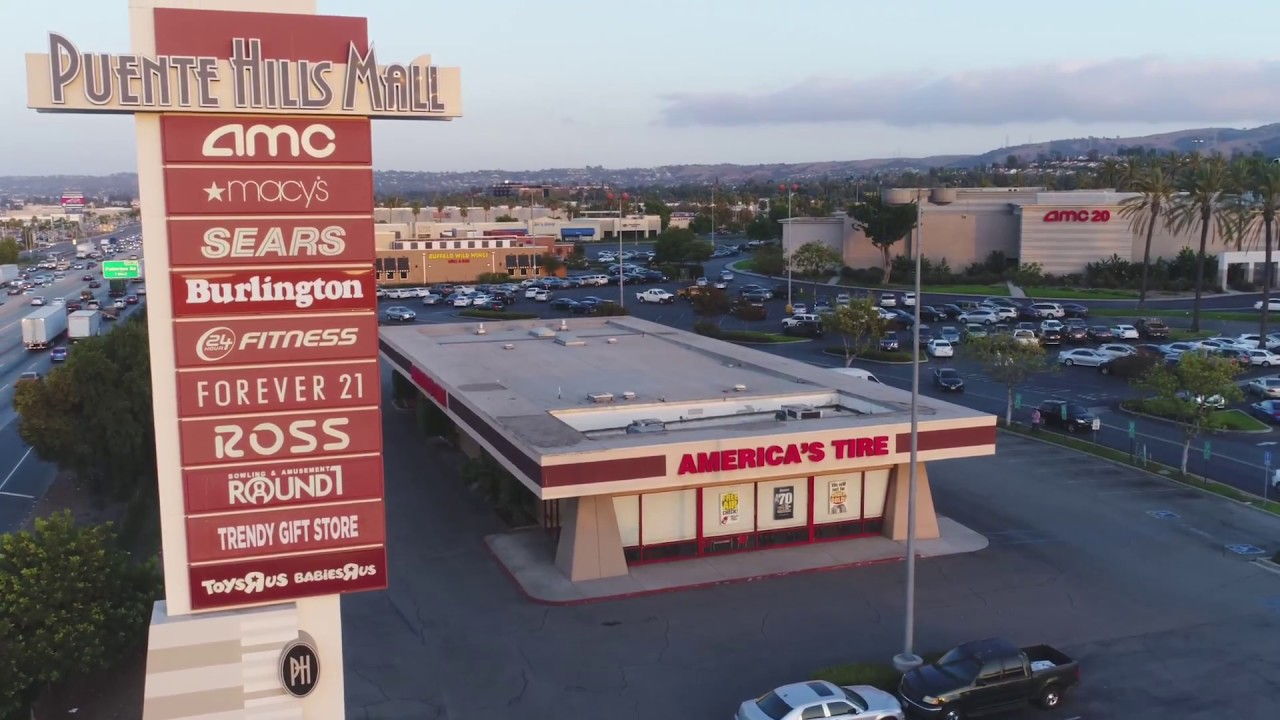 When Marty and Doc reach Mr. Peabody’s farm, you’re unlikely to question the authenticity of the disheveled location.However, these scenes were actually filmed at Disney’s Studios in Burbank.

This set is named Golden Oak Ranch and has been featured in the original Parent Trap movie as well as American Horror Story: Cult. The set still stands today. 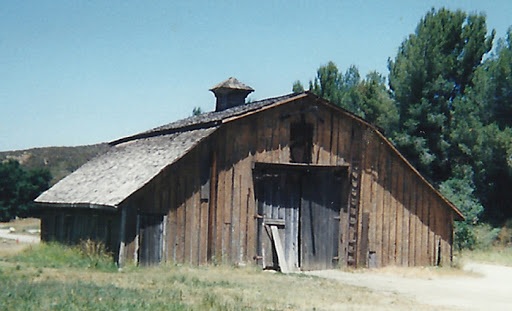 In the 50s, Marty McFly’s mother can be seen living in a picturesque green suburban home.

This house still remains today in South Pasadena and is relatively unchanged. 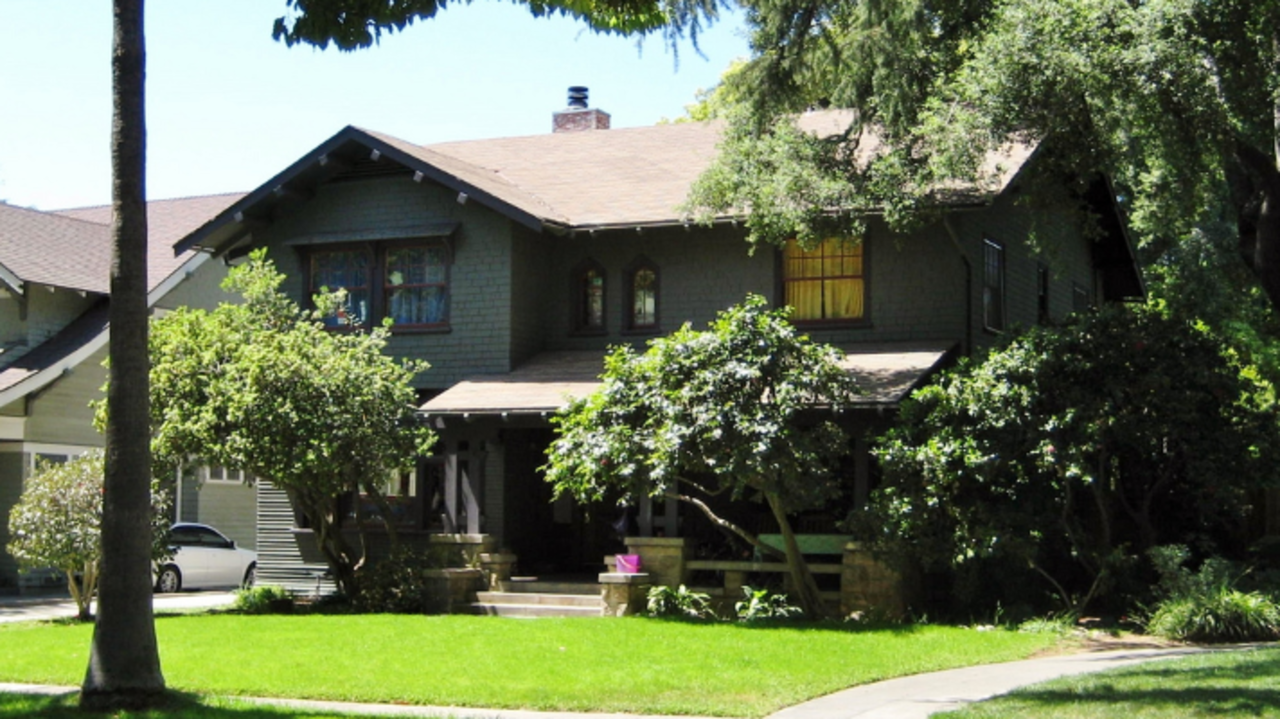 You may remember Doc sacrificing his mansion in the movie for the sake of building the time machine.

This mansion is actually Gamble House in Pasadena. This house is regarded as a historic landmark due to its architectural innovation. The scenes that feature the inside of Doc’s mansion aren’t actually filmed at the Gamble House, but they’re filmed at the Blacker House instead.

This is another celebrated work of architecture created by the same men who built the Gamble House. It can still be seen today in Pasadena. 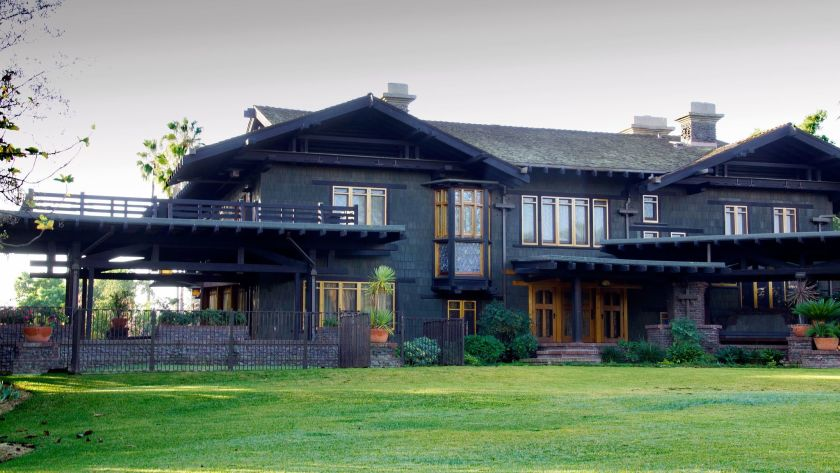 Seemingly every resident in Hill Valley back in the 50s was lucky enough to live in a spacious Craftsman home.

On the very same street as the Blacker House in Pasadena, you’ll find George and Lorraine’s childhood home.

In the movie, the Enchantment Under the Sea dance takes place in the basement of Hollywood United Methodist Church.

It’s thought that the location resembled a school sports hall and was conveniently close to other filming locations. 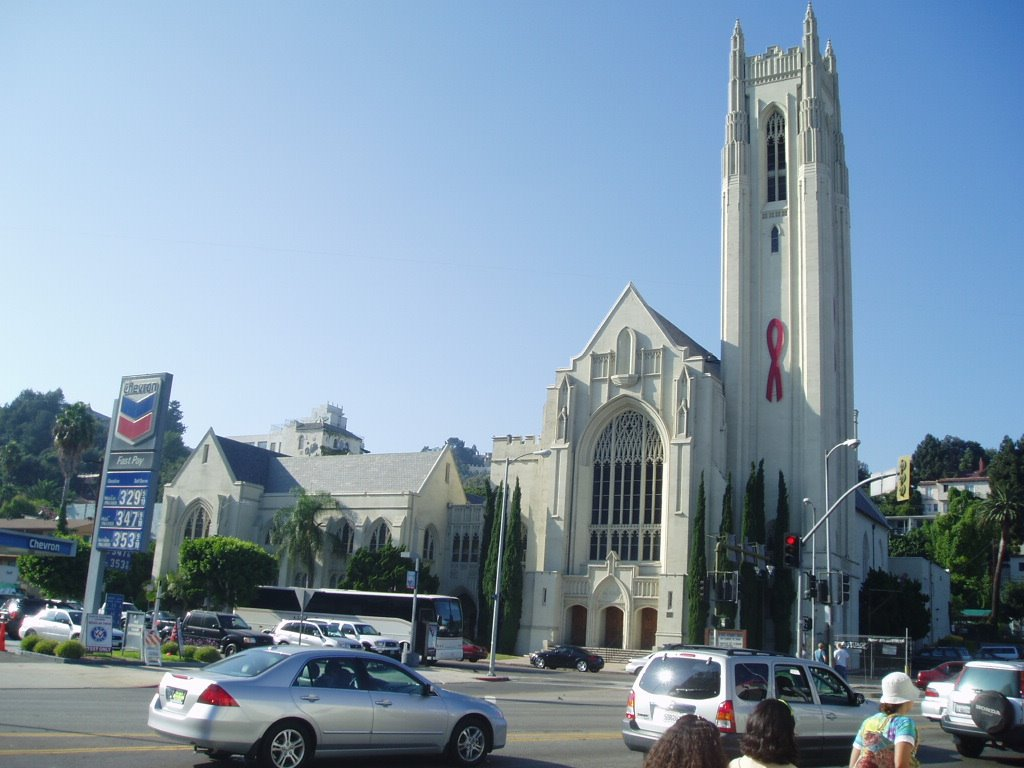 Near the end of the movie, Marty heads to Griffith Park in order to reach 88mph to propel himself back to the future. 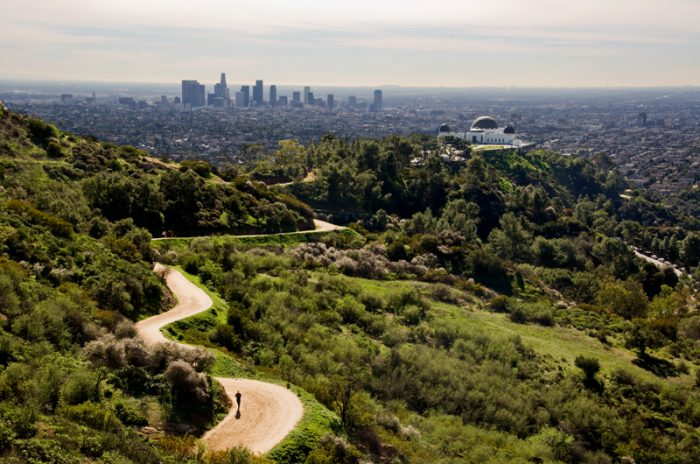