Putting the Cult Classic Movie in its Place

Clerks put Kevin Smith on the movie-making map and gifted us the first onscreen appearance of the loveable and hilarious juxtaposition that is Jay and Silent Bob. But where exactly was Clerks shot?

Before the release and subsequent success of Clerks, Smith was a total unknown. Anything he wanted to create needed to be as low budget and localized as humanly possible, which is why it’s shot entirely in Smith’s (and Mewes’) native New Jersey, costing a minuscule $27,000 to make. 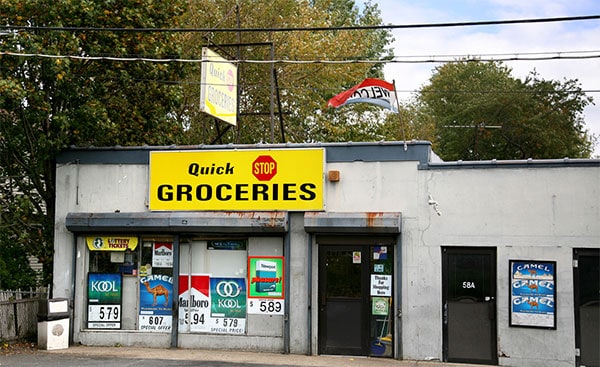 I’m Not Even Supposed to Be... Where Today?

The infamous Quick Stop, the primary set of the Clerks 1 and 2, isn’t actually a film set at all. It’s an honest to god, real life, brick and mortar establishment located at 58 Leonard Avenue, Leonardo, New Jersey, a 16 minute drive from the street Smith grew up on.

Smith was an employee at the Quick Stop and thus was granted limited access to film Clerks there. Only given permission to film inside of the store at night between the hours of 10.30pm (when the actual shop closed) and 5.30am (little before it reopened), Smith cleverly worked these limitations into the story.

One of the plot points is that an anonymous ne’er-do-well has shoved their gum into the shutter padlocks, thereby accounting for their permanent closure in the film.

As Kevin Smith was working at the real Quick Stop throughout the day as normal whilst filming Clerks through the night, he was running on as little as an hour's sleep per 24 hours. After clearing up set, he would simply open up shop.

There you have it, film buffs; Clerks was filmed right there in New Jersey, a stone’s throw away from Kevin Smith’s own childhood home, in a convenience store he worked at through the day.