This is partly due to its excellent filmmaking. But also due to its portrayal of the Sioux tribe. Even today, movies, TV series, and other forms of media fail to accurately portray the lives, stories, and traditions of Native American tribes.

Dances With Wolves is not perfect in its portrayal. Some of the Lakota language used in the dialogue isn’t 100% accurate. And the film has been criticized for playing into the trope of the white savior.

But there are many within the Native American community who appreciate the depiction of the Sioux tribe in the movie. Kevin Costner, who plays the lead character of Lt. John Dunbar/Dances With Wolves, was even adopted by the Sioux Nation as an honorary member.

So the movie is quite controversial. The portrayal of the Sioux tribe is its primary focus. But the landscape and land on which the tribe live is also an integral part of the story.

It is into the Western Frontier that Dunbar/Dances With Wolves travels to find solitude in the land. So, where were these incredible scenes filmed?

Dances With Wolves was primarily shot in South Dakota. Here are some of the specific locations for the most iconic scenes.

Although many scenes were filmed on private ranches, a lot of the movie was also filmed in public parks.

These are mostly the scenes where Dunbar/Dances With Wolves is out in the wilderness on the Western Front. Some of the areas that were used are:

Makȟóšiča/The Badlands National Park is used throughout the movie. It covers 246,756 acres of land. 64,144 acres of which are a designated wilderness area. 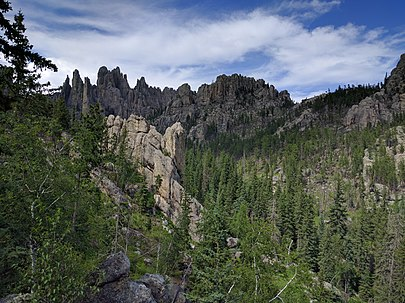 Ȟe Sápa/The Black Hills is a small and isolated mountain range. It rises on the Great Plains in South Dakota and extends to Wyoming.

The Šahíyela Wakpá/Belle Fourche River is a tributary of the Cheyenne River.

This scene was filmed on the private Triple U Buffalo Ranch. It is a 50,000-acre ranch situated in Stanley County, South Dakota.