The screenplay was adapted by James Dickey, the author of the 1970 novel of the same name. The film follows four Atlanta businessmen—Lewis Medlock, Ed Gentry, Bobby Trippe, and Drew Ballinger— as they decide to canoe down a river in the remote northern Georgia wilderness which is soon to be dammed.

Interestingly, despite the four friends from the city soon finding themselves in deep water, the movie generated a whitewater tourist boom in the area of Georgia it was filmed in.

Despite the efforts of John Boorman and cinematographer Vilmos Zsigmond to desaturate the colors of the surrounding landscape - the Georgia wilderness is still rather breathtaking even in washed-out tones, so it’s easy to see why movie fans flocked to the region to try their hand at this extreme sport.

Deliverance was filmed in a northeastern corner of Georgia, around Rabun Gap and Clayton in Rabun County, towards the border with the Carolinas.

The 'Cahulawassee River’ mentioned in the film is fictitious, and it is actually the Chattooga River that Lewis (Burt Reynolds), Ed (Jon Voight), and friends canoe down. The Chattooga River marks Georgia’s border with South Carolina and flows south into Lake Tugaloo. 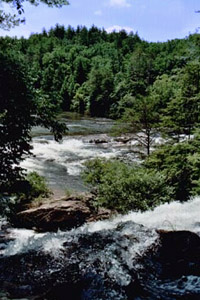 The Chattooga river stretches 57 miles (92 km), but the section of the river used in the film is the roughly 10-mile stretch south from Earl’s Ford

Road, which runs beneath Highway 76, Lookout Mountain Scenic Highway, to Lake Tugaloo itself.

Chattooga is famous for its ferocious rapids – which include Bull Sluice and Five Falls. However, the movie was filmed at the less well-known Screaming Left Turn, Raven Rock, and the striking geological formation which has since become known as Deliverance Rock, after the film raised the profile of the Georgian wilderness.

Rabun County is the northeasternmost county in the U.S. state of Georgia. 148,684 acres (601.70 km2) of the county is made up of the Chattahoochee National Forest, a national protected area offering miles of hiking trails, lakes, and the Blue Ridge Mountains for those looking for a real outdoors experience.

However, after the release of Deliverance, many visitors underestimated the ferocity of the Chattooga River, and there were several fatalities as a result. The river was specifically chosen for the film due to its inaccessibility, so it’s not ideal for the inexperienced canoeist looking for a spontaneous adventure. 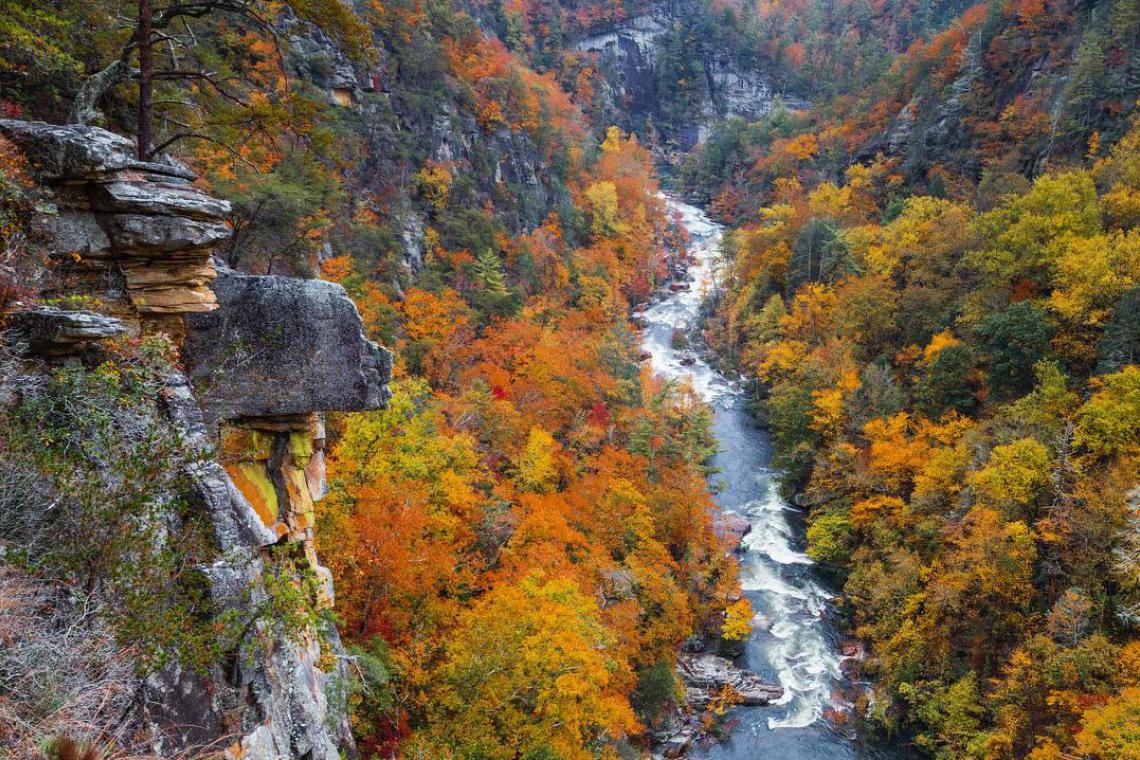 One canoe down, and following the mysterious death of Drew (Ronny Cox), the remaining three friends enter a calmer stretch of water, and this is the spectacular Tallulah Gorge, which is found downstream from Tallulah Falls.

This is the area where Ed scales the sheer cliff face to confront the remaining mountain man.

The two-mile-long gorge, a couple of miles west of Tugaloo Lake, is a 1,000-foot deep chasm which, in 1992, became Tallulah Gorge State Park.

There are trails where you can hike to several overlooks, or you can get a permit to hike to the gorge floor, though these are not issued on some dates, due to water releases.

In 2002, a suspension bridge was built 80 feet above the rocky bottom, which allows visitors to enjoy the spectacular views of the river and waterfalls.

In 1970, famed tightrope walker Karl Wallenda - founder of The Flying Wallendas - got the best view of all when he crossed the Gorge on a high-wire.

The rising waters at the end of the film are Lake Jocassee, which was created when the Duke Power Company flooded Jocassee Valley in 1973.

Several Waterfalls flow directly into the lake, including Laurel Fork Falls, Mill Creek Falls, Wright Fork Falls, and Moondance Falls, and the lake is about 30 miles east of Clayton, over the border in Oconee County, South Carolina.

Most man-made structures were demolished before the flooding of the valley, though divers recently discovered the remains of a lodge, 300 feet below water, which was left intact until the lake rose.

Mount Carmel Baptist Church Cemetery was also used as a setting in Deliverance (1972) which was filmed before the lake was flooded, and is now covered by 130 feet of water in the lake.

The Cahulawassee River in Deliverance is based on the real-life Coosawattee River, which begins at the confluence of the Ellijay and Cartecay rivers in the city of Ellijay in central Gilmer County and flows west through the foothills of North Georgia. Coosawattee was dammed in the 1970s to form Carters Lake.

Carters Dam is the tallest earthen dam east of the Mississippi, which was completed in 1977. When production for Deliverance began, it was already too late to use the Coosawattee itself, as the trees had already been stripped from its banks, which is why the film uses the Chattooga river instead.

Overall, Deliverance highlights the powers of nature and helped draw attention to the awe-inspiring landscapes of Northern Georgia.

However, the Georgian wilderness is not for the faint-hearted and requires experience, tenacity, and careful planning - particularly if you're hoping to go canoeing!