Skip to content
Devil’s Advocate was released in 1997 in America. It is a supernatural horror movie written by Jonathon Lemkin and Tony Gilroy. It was directed by Taylor Hackford and has a run time of 144 minutes.

It is loosely based upon a 1990 novel by Andrew Neiderman with the same title.

The movie is about a newly qualified lawyer from Florida (played by Keanu Reeves) who is hired by a major New York law firm and must relocate.

His wife (played by Charlize Theron) begins to experience supernatural hauntings and Reeves begins to realize the owner of the New York firm is actually the Devil in disguise. This character is played by Al Pacino.

Pacino’s character is named after John Milton, the author of Paradise Lost. There are many allusions to this tale, the legend of Faust, and Dante’s Inferno within the movie.

The scenes set on 57th Street were actually filmed there. The directors had the road emptied to film the scene.

It was shot at 7.30am on a Sunday morning to minimize the impact on the residents of the area.

The Manhattan Continental Club and Penta Plaza on Wall Street were used as the location for the office scenes.

An Italian and a Japanese architect were hired to create an ‘ultra-modern’ appearance to the sets.

Theron’s character was taken shopping in SoHo at what was formerly Yohji Yamamoto’s, on 103 Grand Street.

This was filmed at Fifth Avenue at 94th Street, Carnegie Hall.

Trump Tower at 725 Fifth Avenue was the setting for Alexander’s home.

They actually filmed the scene inside of Donald Trump’s penthouse apartment.

A variety of churches were used as filming locations.

The Church of the Heavenly Rest in New York is the backdrop for the reveal of Theron’s rape by Milton.

Barsoon’s funeral used the exterior of the Central Presbyterian Church on 593 Park Avenue to set the scene.

This was called St Andrew’s Catholic Church in the movie.

The Manhattan Church of the Most Holy Redeemer, on 173 East Third Street was used for Al Pacino’s scene with the holy water.

The court scenes were all filmed inside a court house in New Jersey, Bergen County Court House.

Some exterior court scenes were shot at the Surrogate Court Building, on 31 Chambers Street and Centre Street in Manhattan.

These were filmed in Manhattan.

They used the actual Subway station on Chambers Street and Centre Street. 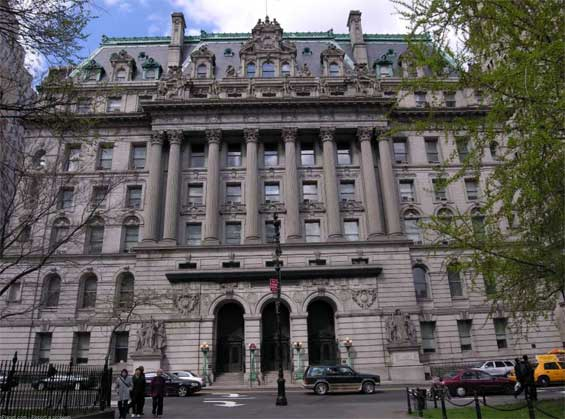 The initial film shoots were done in New York and were completed by the March of 1997. In July the production moved location to Florida to complete filming.

The scenes set in Gainesville churches were actually filmed true to location.

The director even managed to convince the pastor and his flock to appear as extras in the movie.