Fans of the gothic filmography of Tim Burton will no doubt be familiar with the director’s 4th feature film, Edward Scissorhands (1990).

The cult classic tells the story of a young man (Edward), created and animated by a loving inventor in a secluded mansion at the edge of a suburban, American town.

Tragically, the inventor dies before he can finish his creation, and Edward is left alone, with scissors for hands, to fend for himself in the crumbling house. That is until a kindly Avon representative rescues him and whisks him away to a new and unfamiliar life in suburbia.

Equal parts heartwarming, disturbing, and thought-provoking, Edward Scissorhands is one of Burton’s most well-loved films.

In Burton on Burton (1995), the definitive interview-book of the director’s life and creations, Burton explains that the quirky story is a personal commentary on his own childhood growing up in Burbank, California.

But while Edward Scissorhands is confirmedly based on the small-town social politics of Burbank, fans might be surprised to know that the movie wasn’t filmed there at all!

Filming for Edward Scissorhands actually took place in Florida. The precise location used to portray the neighborhood into which Edward is adopted is Tinsmith Circle, Lutz, in Hillsborough County.

Fans wishing to catch a glimpse of the filming location of Edward Scissorhands can still do so as the neighborhood remains standing some 30 years later.

However, as you can see, the sickly-sweet pastel colors of the houses are not part of Tinsmith Circle’s original aesthetic and were added by set designers for the purposes of the film. The same is true for the iconic (and fake) sculpted hedges.

The inventor’s mansion, meanwhile, was specially built on farmland in Dade City, Florida. Unfortunately, the impressive gothic structure was taken down after filming for the movie wrapped. 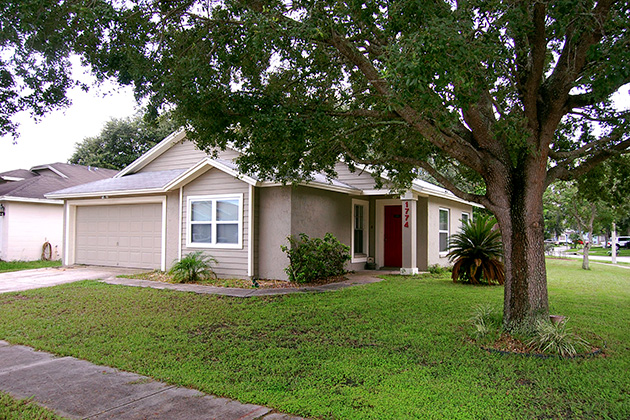