Written, directed, and produced by John Hughes, Ferris Bueller’s Day Off is a love letter to Chicago. It tells the story of cocky but lovable Ferris Bueller as he skives off school to explore Chicago with his best friend and girlfriend.

Starring a young Matthew Broderick as Ferris, Alan Ruck as Cameron, and Mia Sara as Sloane, the film had a budget of $5.8 million. It earned more than 10 times that amount at the box office when it premiered in 1986.

Ferris Bueller’s Day Off has become a cult classic and was added to the National Film Registry in 2014 as it was deemed to be culturally significant.

Mostly filmed in Chicago, the city Hughes loved the most, the film features many of the famous Chicago landmarks including the Sears Tower, the Art Institute of Chicago, and Wrigley Field.

But let’s take a closer look at some of these filming locations.

Scenes featuring the Beuller home were some of the only filmed outside of Illinois.

The famous home was actually located at 4160 Country Club Drive, Long Beach, California. It is a colonial property that was used for the exterior and kitchen shots.

Plants at the Long Beach residence had to be covered up or disguised as pine trees to make it feel like a midwestern home.

Ferris’ bedroom was also shot in California. It was a set created on stage 16 at Paramount Pictures in Hollywood. The bedroom was supposedly modeled after John Hughes’ teenage bedroom. 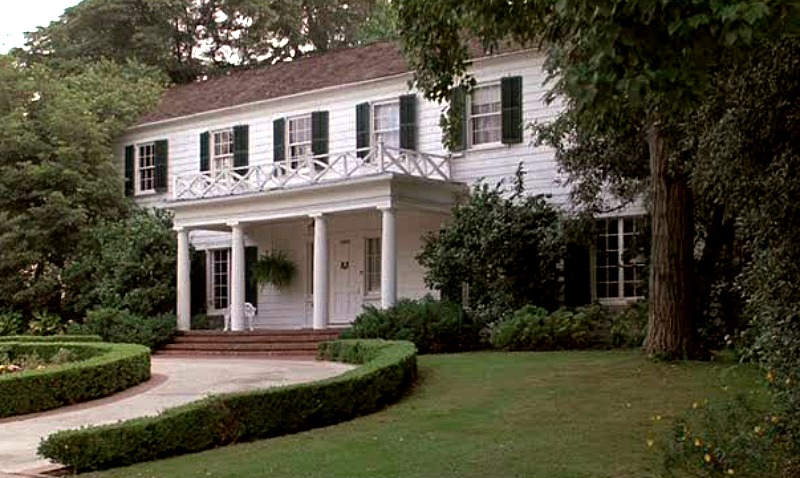 Cameron, Ferris’ morose best friend, lives in a modernist dream house that has a glass-walled pavilion for his father’s classic car collection.

This house is located in Illinois. Known as the Ben Rose House, the modernist abode is located in Highland Park, Illinois. It was recommended to Hughes by a studio executive who knew the owner through a Ferrari owner’s club.

Cameron’s bedroom was created on the same Hollywood stage as Ferris’ bedroom. Stage 16 was also the location used for close up shots of the destruction of Cameron’s father’s Ferrari.

The scene that sees the car plummet through the window of the pavilion of the Ben Rose House was filmed on location. The pavilion’s architect David Haid assisted the film crew to prevent damage to the building. 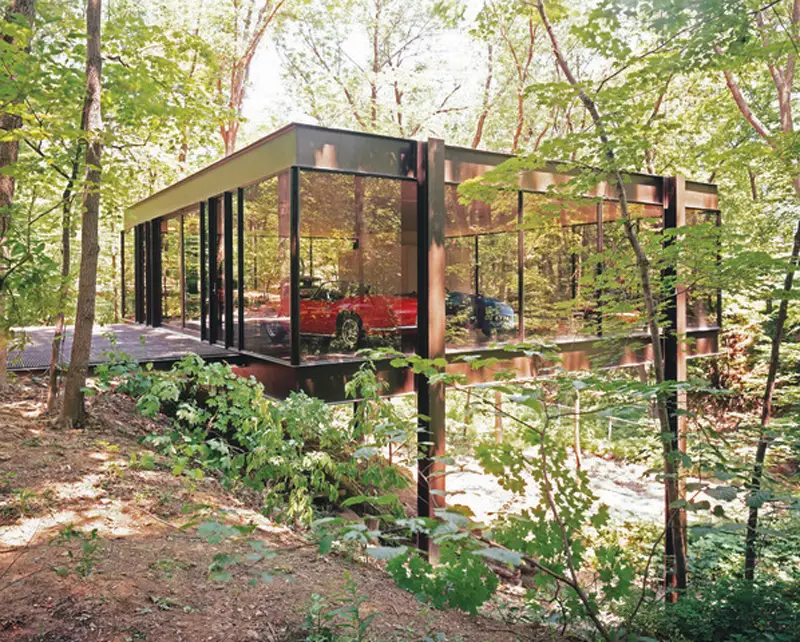 Glennbrook is both the name of Ferris’ school and the name of the school where many scenes were filmed. It also happens to be the school John Hughes attended.

Some interior scenes of Ferris’ school were shot in Maine North High School. This is also the school building that was used as the location for The Breakfast Club

Much of Ferris Bueller takes place in and around Chicago as he explores the city and enjoys all it has to offer.

The famous Von Steuben Day parade scenes were filmed in downtown Chicago on Dearborn Street during the actual German-American parade. A second parade was organized for the shoot the week after the original and the crowd is real residents who responded to ads.

Ferris and Sloane visit the sky deck of the Sears Tower but it is in the Chicago Board of Trade building that Ferris proposes.

Next up on the teen’s list is Wrigley Field. It’s the baseball field on the north side of the city and home to the Chicago Cubs.

Caption: Ferris, Sloane, and Cameron in the Chicago Board of Trade Building. 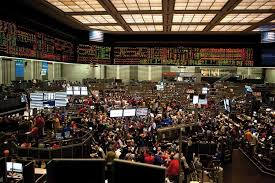 In a loving tribute to the art museum where John Hughes spent much of his teenage years, a number of significant scenes were filmed in the Art Institute of Chicago.

Unlike many locations in Chicago, the Art Institute had not been filmed before Hughes and the production team approached them.

Cameron is particularly entranced by the Georges Seurat painting A Sunday Afternoon on the Island of La Grande Jatte. Ferris and Sloane share a kiss in front of a painting entitled American Windows by Marc Chagall. Caption: Cameron in front of A Sunday Afternoon on the Island of La Grande Jatte by Georges Seurat.

While most of the shooting took place in Chicago and other areas of Illinois, some scenes were shot in California.

Stage 16 at Paramount Pictures was used, as mentioned previously, for Ferris and Cameron’s bedrooms.

The stage was also used to create the economics classroom, the inside of Katie Bueller’s real estate office, and the bathroom of Chez Quis.

The dining room of Chez Quis, the booked-out restaurant Ferris tries to talk his way into, was filmed in L'Orangerie in West Hollywood. At the time of filming it was one of the most renowned restaurants in California.

It is now owned by Nubo but has undergone significant remodeling including the removal of the French doors and mural paintings.

The police station that Ferris’ sister Jeanie visits were the headquarters of a coffee company in the Arts District of California. It’s now the office of Southwestern Bag Company and continues to be featured in films and TV shows.

The pizza parlor where Principal Rooney accidentally confuses a woman playing an arcade game for Ferris was filmed at Regular Jon’s Pizza in Brentwood. This was another personal reference from Hughes who used to take his children to the parlor.

Now, the pizza parlor is a Coral Tree Cafe though a replica of Regular Jon’s Pizza parlor exists in Newbury Park.

In the final minutes of the film, Ferris races his parents home, jumping over several backyard fences on the way.

The scene where he meets the sunbathers was filmed at 1310 Milan Avenue in South Pasadena. A neighboring home was used to film the scene where Ferris jumps on a trampoline and ends up in his own backyard.

Milan Avenue and the houses on it have featured in a huge number of films and television programs. It’s a favorite with location scouts in Hollywood.