If there is one thing that we can thank the 1980s for, it is the movies that they brought us. Some of the best films to this day were filmed and released during the 1980s, and the majority of the ‘classic’ films came out during this time.

The 1980s was not only the era of horrors but also the era of come of age films. From the adaptation of Stephen King’s ‘The Body’ into what we now know as Stand by Me, to classics like the Karate Kid, we have the 1980’s to thank for so many films. That’s not forgetting the 1985 Steven Spielberg classic, The Goonies.

The Goonies is without a doubt one of the best ‘coming of age’ films around. It has everything you want in a film: criminals, mystery, and fun. It stars some of the greatest child actors of the time and has a killer storyline behind it.

The film takes us on a journey as we follow this group of ragtag friends. After finding an old and worn treasure map, the group of pals set out on an adventure to try and find the treasure of a pirate that was legendary in their area.

It is packed full of tender moments that draw tears, and a mixture of comedy, including the ‘Truffle Shuffle’ which have you crying with laughter. It is a film that is guaranteed to cheer you up no matter what mood you are in, and is without a doubt a timeless classic which will be just as good in years to come.

The film itself is based in the popular State of Oregon, and the majority of filming took place here. So if you want to visit some of the locations used in the film, this is a food place to start.

As you can probably tell by watching the film, the area in which the film was shot is located on the coast of Oregon. In fact, the majority of filming took place in and around Astoria, which is on the North coast of Oregon and borders with Washington State.

So if you want to take a tour of the filming locations of The Goonies, this is where you should go.

One of the first locations we visit in the film is the home of the lead character, Mickey (played by Sean Astin). His family is on the verge of being evicted from their home, and it sets the tone for the beginning of the film.

If you wanted to you can visit both this house, and the home of his friend, Data (played by Johnathan Ke Quan). The houses are just a stone-throw away from one another, with Mickey’s home located at 368 38th Street and Data’s home at 304 38th Street.

You will find 38th Street just off of Franklin Avenue nearby Columbia Field.

However, both of these filming locations are now private homes so you should be mindful of the residents and respect their privacy. The film also takes us to the place where Mickey’s Dad works. In the film, it was known as the Astoria Historical Museum, but in real life, you can visit the Flavel House Museum.

It is actually located in Astoria and is one of the oldest homes dating back to the 1800s. If you want to visit this museum you will find it at 441 8th Street at Duane Street, and you will be able to notice it immediately because of its incredible architecture.

All of the filming locations for this film are generally within driving distance of one another, and just across the road from Mickey’s Dad’s workplace, you will find another location. In the film, the dreadful Fratelli family plot to spring one of the sons from jail.

It is a key scene in the film and you will be able to find the location of this jail-break at 732 Duane Street. The old prison building looks identical to how it did in the film and is now home to the Oregon Film Museum. In the film, there is a police chase of the Fratelli family which takes us directly to the next filming locations. This includes a scene on a beach and is the moment where Cannon Beach, Ecola State Park features in the movie.

This beach area becomes a central part of the storyline and the disused cafe that the treasure map leads Mikey and his friends to was specifically built for the movie. After filming, the cafe was deconstructed, however, you can still visit the Beach where it was once located.

From there, a majority of the filming takes place ‘underground’ as the treasure map takes the Goonies on a hunt for One-Eyed Willy’s treasure. They encounter all sorts of problems along the way, as they journey through the underground tunnels on their search. Where these underground scenes were filmed is unclear, but when they do emerge, the boys are far from Astoria in Oregon.

In fact, the beach where the boys emerge is located on the Northern Coast of California, about 15 miles north of Bodega Bay. If you want to visit the beach with the famous jagged rocks, you should go to Goat Rock Beach, Goat Rock Road, 5400-5900 N HWY 1.

If you visit this beach there is an incredibly slim chance that you will encounter One-Eyed Willy’s treasure, but you will likely encounter seals as the beach is home to a colony of them.

Aside from this one location, the majority of the movie is filmed in the area in and around Astoria, making it an easy location if you want to see where The Goonies was filmed. 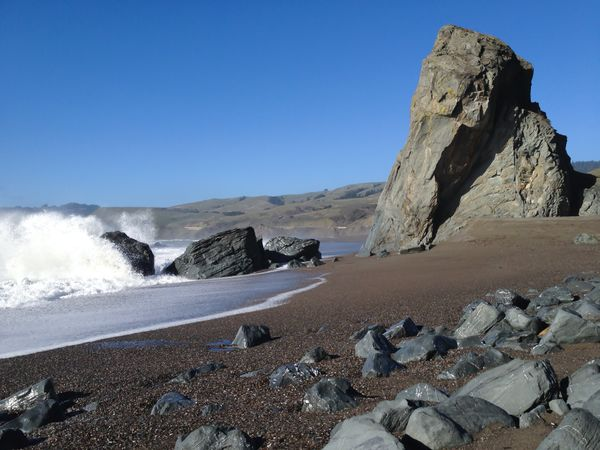