Putting the Futuristic AI Nightmare on the Map

The primary tenet of I, Robot and indeed sci-fi as a whole is to elicit a not so improbable departure from current states of affairs and being.

Stories take place years ahead of present day, so placing a sci-fi film geographically isn’t always easy, nor is it our first thought.

We’re often wrapped up in the drama and unfamiliarity of alien environments, but even the most mind-bending futurism in film has to have an Earthly base. 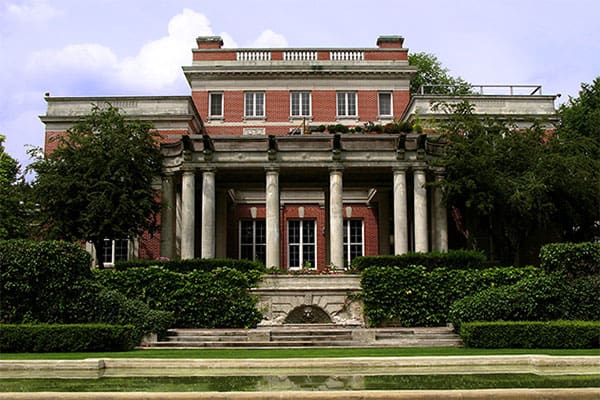 Where are We Told it’s Set?

The plot leads us to believe that everyone’s favorite technophobe, Dell Spooner, is storming down the moonshod streets of future Chicago (2035) on his antiquated 2004 MV Agusta F4-SPR 750.

In reality, hardly any of the movie was actually shot in Chicago.

Where Does the Chaos Actually Take Place?

Although some footage was indeed shot in Chicago, Illinois, and less so in Dumont Dunes, California, the majority of the movie was actually shot in Vancouver, Canada. Chicago was likely only used for establishing shots in which no action or acting took place.

Instead, the production team recreated defining Chicago Landmarks such as the Marina City Tower and Wrigley Building in Vancouver using CGI, and the studio sets were predominantly assembled in North Vancouver at Pier 94.

Dell’s apartment building and the scene with him walking from an alley and down a crowded street,  admonishing a scrappy Farber (Shia Labeouf) for cussing poorly, is shot in downtown Vancouver opposite the Leckie Building.

The kitschy Ovaltine Cafe in which Spooner, drinking a beer, looking sorry for himself, is told by his boss (Chi Mcbride) that the case is over, is a real-life 1942 establishment that still exists just as it is in the movie - besides the robot barman I assume.

If you’ve got a hankering for a malt beverage and you’re in the area, you can find the Ovaltine Cafe at 251 East Hastings Street, Vancouver.

As is the case with a lot of Will Smith films - for whatever reason - one of the opening scenes sees him in a foot chase pursuing a robot that has stolen a handbag. This whole scene was shot on a street affectionately known as Antique Alley due to the number of antiques and collectibles shops in such close proximity.

It runs for almost the entire 600 block of New Westminster’s Front Street on the Burrard Peninsula. You may also recognize this street in other films such as Godzilla (2014) and the classic Jackie Chan action flick, Rumble in the Bronx.

In fact, so many films are shot there that one of the antique shops has started stocking movie props as well.

All scenes depicting the US Robotics headquarters were actually filmed on the Aerospace Technology Campus of the British Columbia Institute of Technology occupying the Vancouver International Airport, 3800 Cessna Drive, Richmond, British Columbia.

Dr. Lanning’s (James Cromwell) Chicago mansion, home to the very lucky cat that Spooner saves from certain squishing, is also a famous Vancouver building. In reality, it is the Beaux Arts mansion built on a ten-acre estate in South Vancouver in 1925.

You can find it at Shannon Mews, 7101 Granville Street, at West 57th Ave. When it’s not being razed by renegade robots, it’s a grand venue for high profile weddings and parties and often hosts performances by the Vancouver Symphony Orchestra.

The tunnel that Spooner blazes through on his Agusta on the way to the US robotics storage warehouse is actually the 730-meter Cassiar Connector tunnel on the Trans-Canada highway located in north-eastern Vancouver.

With the final act of the movie well underway, Faber hits the streets to protest the NS5 imposed curfew, while Spooner and Dr. Calvin (Bridgette Moynahan) arrive at the West Cordova Viaduct situated at 1077 West Cordova Street, in front of Canada’s largest building, the Shaw Tower.

As tensions in the street bubble over into a full-on human vs robot smackdown, the setting is actually the Central City Mall in Surrey, British Columbia, Canada.

So,  there you have it. The near robot apocalypse was actually mostly filmed in British Columbia,  Vancouver, Canada. Moviemakers often distance themselves from the storied locations to cut costs on production.

It’s not just America that’s avoided. Oftentimes what’s portrayed as Egypt in movies is actually Tunisia. It’s a common practice not just in Hollywood, but in film making in general, thus, Canada is quickly becoming more of a viable alternative for blockbuster productions such as I, Robot.