In and out is an American comedy film that was released in 1997, and directed by Frank Oz. It stars actors such as Kevin Kline, Tom Selleck, Joan Cusack, Matt Dillon, Debbie Reynolds, Bob Newhart, Shalom Harlow, and Wilford Brimley.

It is known as one of the first Hollywood attempts at a mainstream gay movie, with the iconic 12-second kiss between Kevin Kline and Tom Selleck. It was inspired by the speech that Tom Hanks gave when receiving his Oscar in 1994, and it has become a highly rewatchable film with many fans. 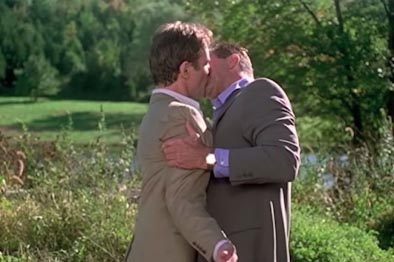 Some fans might want to visit some of the locations where In and Out was filmed so that they can experience the places where it takes place first hand, but where was the movie filmed?

The movie is set in a fictional town named ‘Greenleaf’, but it was actually filmed in different locations around New York State and New Jersey. Most of the filming specifically takes place at Northport, in New York.

As for the bar scenes, they were all filmed at Slater’s Mill, in Riverdale, New Jersey.

The iconic Hollywood Oscar exteriors weren’t filmed in Hollywood at all and instead were filmed outside the Lincoln Center for the Performing Arts, located in New York.

Other additional scenes were filmed inside the Concert Hall at the Performing Arts Center of Purchase College in upstate New York, located at 735 Anderson Hill Road, in Purchase.

You can visit most of the locations to experience the places first hand, but they might not all look exactly as they did in the movie, as many of them were dressed up and decorated to fit the set, the characters, and the plot.

But either way, a tour of the locations can become a nice trip around New York and New Jersey!