Kalifornia is a 1993 American thriller road film. It was the directorial debut of Dominic Sena and stars Brad Pitt, Juliette Lewis, David Duchovny, and Michelle Forbes.

The film tells the story of a journalist (Duchovny) and his photographer girlfriend (Forbes) who travel cross-country together to research serial killings. Unwittingly, they end up carpooling with a psychopath (Pitt) and his childlike girlfriend (Lewis).

Production of Kalifornia began in the late spring of 1992, and the film was shot in Georgia and California. The early scenes were shot in an old industrial area west of downtown Atlanta, and in the Castleberry Hill neighborhood.

The murder site ‘Bradbury Textile Warehouse’ which was supposedly in ‘Pittsburgh’ is actually in Murrays Mill, 1200 Foster Street, Atlanta. It was previously the E Van Winkle Gin and Machine Works and is now a listed historical site due to its cultural and architectural value.

Production then moved westward through various locations in California. On June 28, 1993, production was temporarily halted when a 7.5 magnitude earthquake occurred while filming at a gas station in rural California.

Director Sena spoke out about the shoot being extremely difficult, with the shooting schedule sometimes allowing only one day for filming in certain locations.

The arid, humid conditions also took their toll, with producer Steve Golin recounting that “They [the cast] have been working ridiculous hours under conditions that are not star-like. The hotels in the desert are not luxurious; they get a room with a swamp cooler, they don't even have air conditioning. It's a rough show.”

The desert backdrops of Kalifornia were primarily filmed in the Alabama Hills, above Lone Pine, in central California. These striking rock formations are set against the atmospheric backdrop of the snow-capped Sierra Nevada range and have featured in countless movies.

The Sierra Nevada range has doubled as ‘India’ and the Himalayas in films such as King of the Khyber Rifles, Gunga Din, and Lives of a Bengal Lancer, and feature heavily in Western films too, such as How the West Was Won and Joe Kidd. 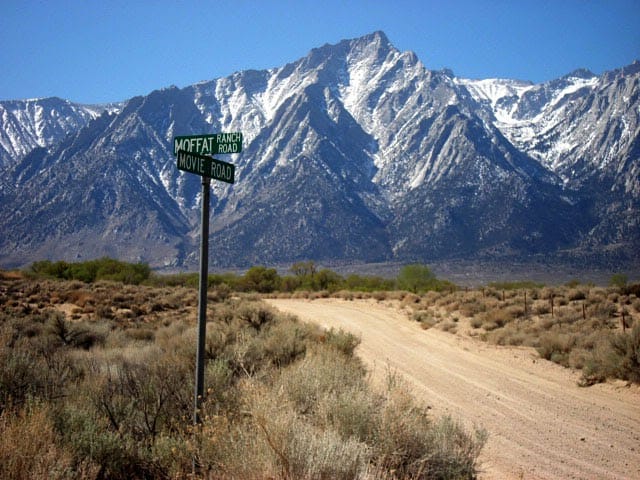 The annual Lone Pine Film Festival marks the cinematic legacy of the region, which is reflected even in the place names, such as “Movie Road” - the track leading up to the most frequently used area.

The desert café in the film is the closed and boarded-up Ludlow Café on I-40, about 30 miles east of Newberry Springs in the southern California desert. More desert scenes were filmed further west on I-40 at Amboy.