Napoleon Dynamite is a film that not everyone will have heard of, but it is a great classic that fans of comedy are bound to have watched and enjoyed. In fact, the film became so popular in its time, and it was so well acclaimed, that a TV series based on the film was created.

However, in this article, we will be talking only about the film, as that is where it all started.

Released in 2004 and directed by Jared Hess, it stars Jon Heder that plays the main character that is also the reason behind the film’s title:

Napoleon Dynamite. Napoleon is a socially awkward 16-year old, and the film essentially follows him as he navigates life at school and at home, as well as the many types of interactions with the people around him.

And as fans of the movie will say, the comedy truly is golden. It’s especially funny if you’re well versed in geek culture or you consider yourself a nerd, you might even see yourself within Jon Heder’s character!

So, for fans that want to visit the different spots where the film takes place, or for those that are simply curious about the locations they chose for the movie, we’re here to answer the question of where Napoleon Dynamite was filmed.

If you’re looking for a summed up and straightforward answer to the location, the entirety of Napoleon Dynamite was actually filmed between different locations in Idaho and Utah. So those are the two places to go if you want to tour the film in real life.

The town where almost all of the Napoleon Dynamite locations can be found is situated on Highway 91, at the Utah border.

It is also roughly around 100 miles north of Salt Lake City. And if you want to know the exact town it is, it’s Preston, in Idaho.

For hardcore fans that really want to tour the different locations, you can actually find a map with all of the film’s iconic locations, which was produced by the very town. It is known as the Sweet map to Napoleon’s Preston. 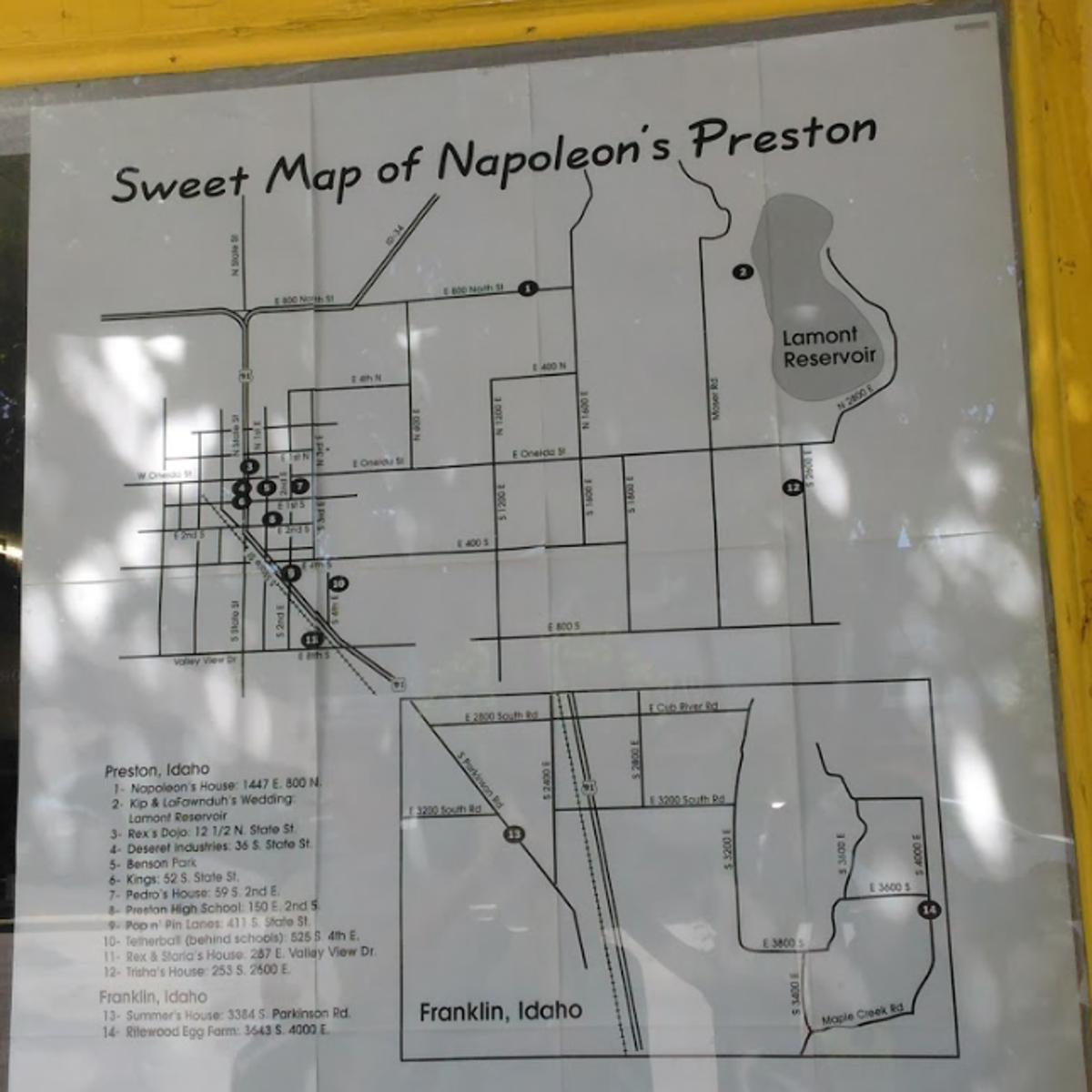 Sweet Map to Napoleon’s Preston, produced by the town of Preston, in Idaho

The house where Napoleon Dynamite lives in, with his Grandma and his brother Kip, is located at 1447 East 800 North Road, which is towards the Northeast of town.

Both the exterior and the interior home scenes were filmed in this house, and you can swing by and see it in person as it’s very easy to find and highly recognizable. 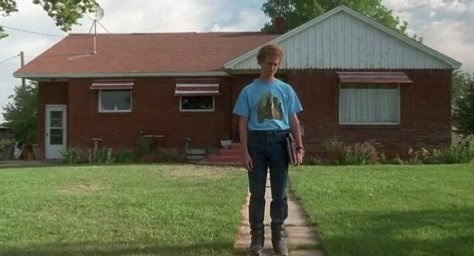 Napoleon Dynamite in front of his house, located at 1447 East 800 North Road, in Preston (Idaho)

As for the school, where a lot of the film takes place, all of the scenes were filmed at Preston High School, located at 151 East 200 South, in Preston.

This is still a functioning school nowadays, so you could easily visit both the exterior and the interior, and walk the halls just like Napoleon Dynamite did in the movie. 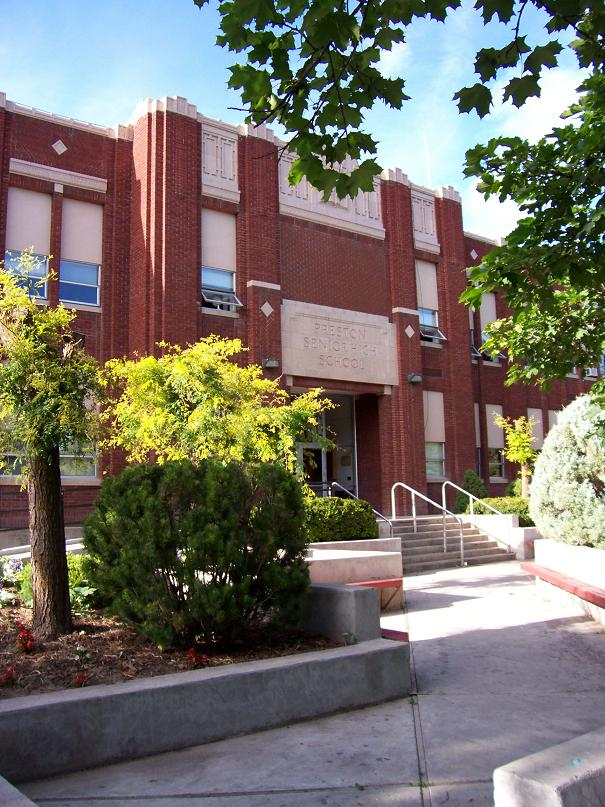 The main entrance to Preston High School, where all of the school scenes for Napoleon Dynamite were filmed.

There are a few other houses in the town of Preston that are featured during the filming of Napoleon Dynamite, centering on different characters and pivotal scenes in the overall plot.

The first is the house belonging to Pedro, the new boy that moves into town. In front of this house is where Napoleon iconically tries to jump on Pedro’s Sledgehammer bike. It is located at 59 South 2nd East.

The second house is where the character Summer Wheatley lives, and it is where Pedro leaves a home-made cake. This home is located at 3384 South Parkinson Road.

The third house featured for filming within Preston town is where the character Trisha lives. This location appears when Napoleon delivers a portrait to her, in an attempt to try and tempt her to prom with him. It is situated, in Preston, at 253 South 2600 East.

A final location of major interest that we wanted to include in this article, is the place where Napoleon buys his suit. And, fun fact, this is also the store where most of the film’s wardrobe came from! It is the Deseret Industries Thrift Shop, and it is located at 36 South State Street. 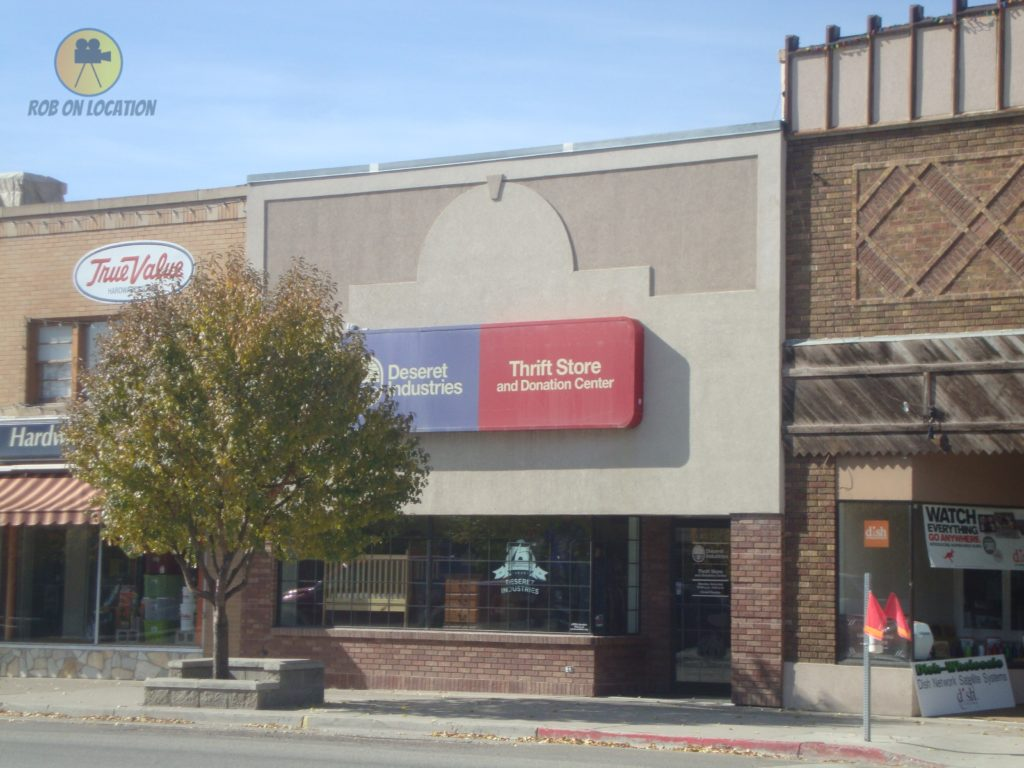 Deseret Industries Thrift Shop, where Napoleon Dynamite purchased his suit, and where most of the film’s wardrobe came from.