Unless you have been living under a rock, you probably will have heard of the 2014 film, Neighbors, by Nicholas Stoller.

This film starring This is the End’s Seth Rogen, Insidious Star Rose Byrne, and High School Musical alumni, Zac Efron is a favorite among so many people.

Despite its fairly recent release, Neighbors burst onto the scene and has quickly become a classic in the ‘feud’ genre of films.

Not only has Neighbors been a huge success here in the US, but it’s also been massively popular across the Pond in the UK and Europe too.

However, if you asked any Brit about Neighbors, you’ll probably be given a lot of information about an Australian soap. In the UK, Neighbors was renamed ‘Bad Neighbors’ to avoid any confusion between the film and the cult Australian soap.

The closest thing that Brits will find to what they know as ‘Neighbors’ in the film is Rose Byrne’s Australian accent.

While the film is entirely based around Seth Rogen and Rose Byrne’s character moving into their dream home only to notice a frat home directly next door.

In reality, the houses are not direct neighbors to one another. That being said, the two homes are situated on the same street making it quick and easy to visit both of the homes which are key players in this film.

The film took only 38 days to film and was pretty much limited to the two houses where the main characters live. Both of these homes are located in Los Angeles, and we even have the addresses if you wanted to visit them.

The first house you will probably visit is that of the Radner’s (Rose Byrne and Seth Rogen) which can be found at 2179 West 20th Street.

The street itself is located between South Western Avenue and South Gramercy Place in the South Kinney district of midtown, West Adams.

This warm family home that is depicted in the film looks just as beautiful from the exterior, but there is one thing noticeably missing. That is the ‘frat house’ which is located next door in the film.

If you wanted to visit the frat house which is home to the boys pledged to Delta Psi Beta, you will have to travel a little further down the street.

This is a pretty big street, but luckily the Delta Psi Beta house isn’t that far away from the house that was used as the Radner’s home. To visit the gorgeous exterior of the fraternity house, it can be found at 2203 West 20th Street. 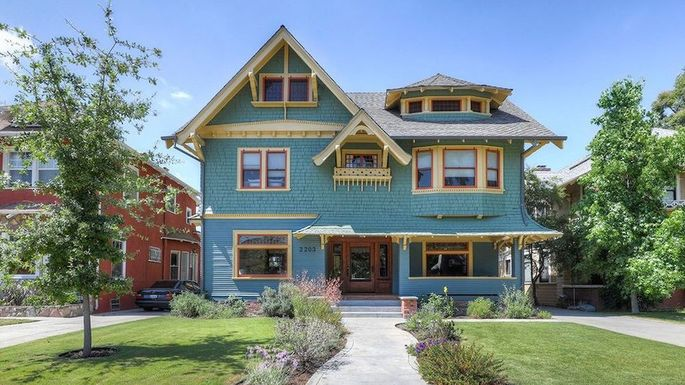 While filming outside of the two homes is limited, there are a few other areas featured. The two main scenes outside of the houses are actually both filmed fairly close to each other.

The restaurant in which the killer plans to take down the frat boys is devised can be found at Johnny Rockets Sports Lounge which is in the Universal City Walk at 100 City Plaza.

Similarly, you can find the Abercrombie and Fitch show where Zac Efron’s character parades around shirtless in the same area. Both of these locations were a clever ploy by Universal Studios to get fans of their film to also visit their attractions.