If there’s one movie that needs to be included with any list of cult-classics, it’s Pan’s Labyrinth. This twisted fairytale is full of adventure and mythical creatures, taking us on a journey to places we can only dream of.

But, do any of the places shown in this spellbinding movie actually exist? And, if so, where exactly was Pan’s Pan’s Labyrinth Filmed?

Believe it or not, a lot of the movie was filmed in Spain. This does make sense, however, since it is set at the end of the Spanish Civil War. By filming in Spain, the surroundings are kept as realistic as possible and we’re given the opportunity to really immerse ourselves in the story. 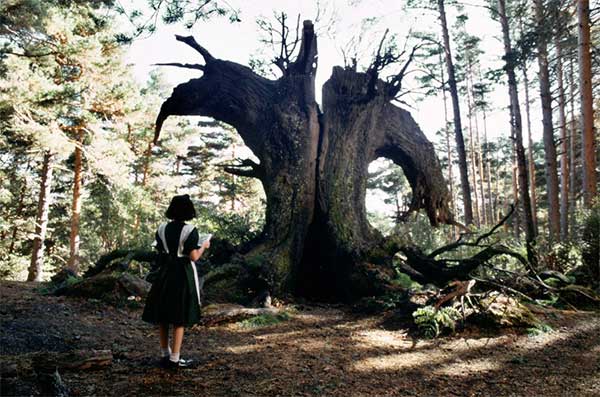 The majority of Pan’s Labyrinth is filmed in the Scot’s Pine Forests, which are located in the mountainous Sierra De Guadarrama regions North West of the country’s capital city of  Madrid.

There are, however, a couple of truly iconic scenes that were filmed in different locations away from Sierra De Guadarrama. Let’s take a look at these below.

The opening scene of Pan’s Labyrinth was filmed in the old town of Belchite. Prior to 1937, where it was sadly destroyed during the Spanish Civil War, this town was once home to 4,500 people and was a bustling environment filled with Baroque and Gothic architecture.

Since its destruction, Belchite has remained as ruins and, while a new town has grown nearby, there has never been any attempt to rebuild it to its former glory.

If you’re a massive fan of Pan’s Labyrinth, you’ll be pleased to learn that you can actually visit Belchite. It is located about 40-miles south of Zaragoza, Aragorn, North-East Spain. You must take care when visiting, however, as the site un unmaintained and falling masonry could pose a danger.

One of the most memorable scenes in the movie is where Ofelia makes her escape from her stepfather, Captain Vidal. As she flees, she makes the way to the realm of the faun. Rather than filming on location, this scene was shot in a recreated set that was designed by the movie’s director, Guillermo del Toro.

The set was constructed near the village of San Rafael, which is about 35-miles away from Madrid.

Separate from the set, the meadow in which the mill stood is set in a clearing a mile South East of the constructed set.