When thinking of iconic films from the 1990s, it would be difficult for the mind not to wonder to Quentin Tarantino’s sophomore effort, Pulp Fiction. The 1994 flick follows the underworld gang culture in 1970s L.A. and features a fantastic ensemble cast led by John Travolta, Samuel L. Jackson and Uma Thurman.

With several interlinking stories and an abundance of well-developed characters, it probably comes as no surprise that Tarantino utilised multiple shooting locations and takes advantage of the different areas within L.A. helping to make Pulp Fiction the masterpiece that it is.

But where was Pulp Fiction actually filmed? Whether you’re planning a trip to L.A. and want to visit various filming locations or maybe you’re a Tarantino superfan and curious to know, we’ve got everything you need to know about the Pulp Fiction filming sets.

Filming, known as principal photography, began on the 20th September 1993 and concluded on 30th November 1993 which for a film of its length and with so many stories and characters is actually a short amount of time.

As the film was made on a relatively small budget, Tarantino uses his knowledge of L.A. to find locations that bring the epicness the film conveys and it worked. It would be understandable to assume that the majority of his locations were shot in a studio but this actually isn’t the case.

Tarantino’s combination of real locations and vintage filming techniques make the film seem much grander in scope and budget than it actually was. 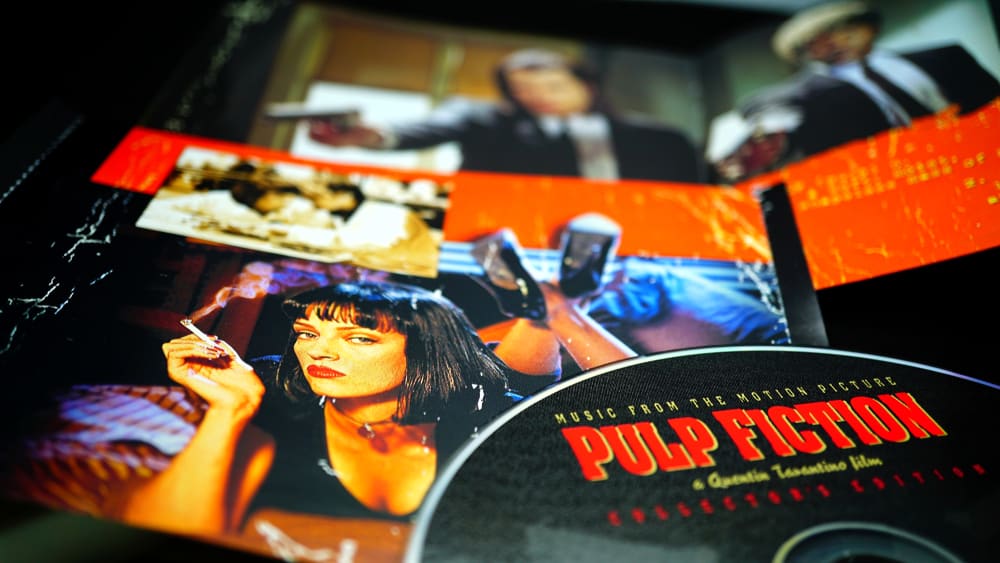 Pulp Fiction was actually filmed in various locations around L.A. rather than a film studio. Sadly, a lot of the buildings used for filming have since been demolished starting with the Hawthorne Grill.

The Hawthorne Grill is the restaurant that witnesses the scene of the robbery carried out by Pumpkin (Tim Roth) and Honey-Bunny (Amanda Plummer) and was located at 13763 Hawthorne Boulevard at 137th Street. The Hawthorne Grill eventually closed down and remained empty for years before being demolished and rebuilt into an auto repair shop.

Another demolished set was the motel that Butch (Bruce Willis) stays at after winning a controversial fight he had initially agreed to lose. The River Glen Motel, which was located at 2934 Riverside Drive was dormant for years before finally being knocked down and converted into a business office block.

The third interior location lost is the Raymond Theatre where Butch partakes in a fight that he had been paid to lose. Located at 129 North Raymond Avenue, it has since been renovated and now stands as a block of apartments.

There is one set that was built from scratch and cost an enormous $150,000 of the film’s budget to do so. That is the famous Jack Rabbit Slim’s, the restaurant Vincent Vega (John Travolta) takes Mia Wallace (Uma Thurman) after being tasked to look after her while her husband is out of town.

The restaurant has a distinctive 1950s vibe with race car booths and celebrity tributes acting as waiters such as Marilyn Monroe and Buddy Holly. The set was built in a warehouse in Culver City but the exterior is taken from a bowling alley at 1435 Flower Street which is now owned by the Walt Disney Company.

In terms of the interior, you can’t visit sadly as it has since been taken down, but the Walt Disney Company has preserved the exterior of the bowling alley so you can have a look at the front.

The final scene in Butch’s storyline, the Pawn Shop scene sees Butch and Marsellus captured and tied up in the basement of the shop. What ensues has been the subject of much controversy as well as the violence depicted in the scene.

The exterior shots in the film tend to take place near the location buildings rather than directly outside them. As most of the interior locations have been demolished since the film’s release, a lot of the filming locations you can visit are the exterior locations.

The first example has already been discussed in the form of the Jack Rabbit Slim’s exterior. Now owned by the Walt Disney Company, the exterior has been kept intact and looks just as it once did.

The home of a defunct bowling alley, the Jack Rabbit Slim’s exterior exudes the nostalgia that Pulp Fiction pulls off so well.

A lot of the exterior shots such as the road where Marsellus Wallace (Ving Rhames) walks across before seeing Butch. The road is Fletcher Drive and is specifically located near 2760 Fletcher Drive. This scene is a homage to the scene from the beginning of Alfred Hitchcock’s Psycho when Marion Crane (Janet Leigh) sees her boss after she thinks she has escaped. The situation in both films is very similar as Butch believes he has escaped before he is spotted by Wallace.

What is so interesting about the filming locations for Pulp Fiction is how each location helps to enhance the story and also brings an authenticity to the film overall.

Shunning and glitz and glamor of Hollywood man made sets, what Pulp Fiction does so well is show the underworld of the seemingly glamorous lifestyles.

It’s important to consider that the only man made set is Jack Rabbit Slim’s, which seems to symbolize the tourist capitalism that a lot of people flock to L.A. for.

With its “celebrity” hosts and tribute to the 1950s, Jack Rabbit Slim’s is the location that represents what people think L.A. is whereas the real locations actually show what L.A. is.