Road to Morocco follows the story of main characters Jeff and Turkey, two carefree friends that are stranded on a makeshift raft in the middle of the Mediterranean sea.

They find themselves washed up on a desert shore, where they soon find themselves riding a camel into the Arabian Nights city, where Turkey finds himself being sold as a slave to the Princess Shalmar of Karameesh.

Stunned by her beauty, Jeff offers to ‘rescue’ Turkey from his fate by volunteering to take his place. However, they first have to deal with the scheming desert chieftain Mullay Kassim, who has his eyes set on the princess for himself. It’s a screwball comedy favorite!

But, ever wondered where this 1942 American Comedy film starring Dorothy Lamour, Bing Crosby, and Bob Hope was filmed? Read on to discover the shooting locations! 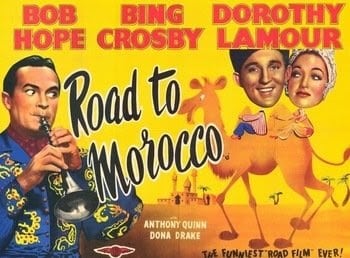 The majority of Road to Morocco was filmed in Paramount Studios in California, as well as Hotel San Carlos, which is in Yuma.

Believe it or not, the desert of ‘Morocco’ turns out to actually be the Imperial Sand Dunes in Buttercup Valley, which is just south of I-8 located to the west of Yuma.

It’s in the heart of Southern California on the outskirts of the Arizona border and is a widely-used shooting location for films that require a desert.

To date, it has been most famously used as a location for Star Wars Episode V: Return Of The Jedi.