Directed by Sam Mendes and released in 2002, ‘Road To Perdition’, is considered and an action drama, though could also easily be viewed as a Gangster movie.

The movie takes place during the Great Depression in 1931, It follows a mob enforcer, Michael Sullivan, and his son Michael Jr, as they seek revenge against a mobster who murdered the rest of their family.

The action starts fast and it’s hard to say who is the true villain of this plot, but we know that Michael Sr and Michael Jr are the good guys.

The film received stellar reviews and won the Saturn awards for the Best Action/Adventure/ Thriller Film.

The only scene to not be filmed on location was the scene in which Sullivan and Rooney drink at O’Neill’s, the town was built in the backlot of Warner Brother Studios in Burbank, California.

It was filmed on ‘Hennessy Street’, one of the sets built in the back lot of the Warner Brothers Studios. This set has been used in many other movies such as Gremlins and some of the Batman films.

Of the two primary locations filmed in Michigan, the blue star highway scene was filmed at the ‘white dog inn’, this is the scene in which Sullivan narrowly evades Maquire at the motel.

The location had been damaged by a fire back in the ’80s and prior to filming was scheduled for demolition.

The second Michigan based scene is the beach house scene where the film ends. It was built for the movie and deconstructed after filming ended.

This is the location of the ambush with Maguire and the almost heart warming moment of pride between Sullivan and Michael Jr. We have to admit we wish the beach house was still there.

While most of the filming took place in a plethora of locations around Chicago and the surrounding area.

The Bronzeville armory was, in fact, converted into a soundstage for the house interiors of the hitman and mob boss (Michael Sullivan, John Rooney). This armory on 35th street, Giles Avenue has since been redeveloped into a school since filming ended. 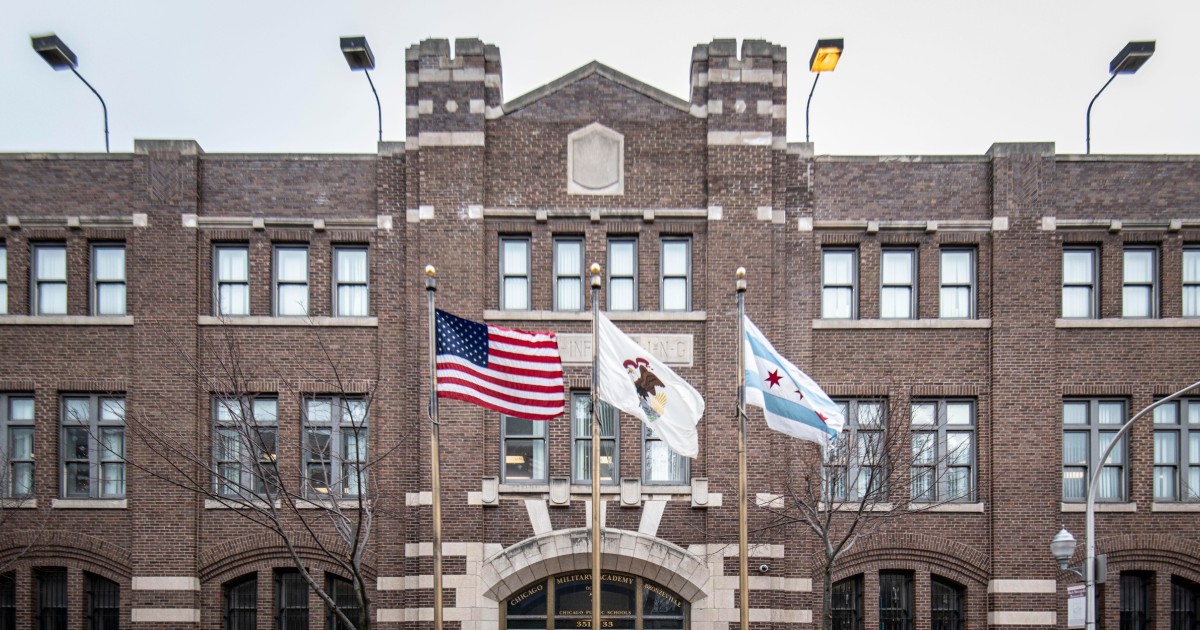 The town in which the Sullivans and Rooney’s live, known as ‘Rock Island’ is actually at a location 30 miles west of Chicago, in downtown West Dundee.

Barrington Hills is a town 10 miles north of Dundee, slightly west is a Country House on Old Sutton Road, this country house played Michael Sullivan’s home in the movie.

While Michael Sullivan’s home was played by an Old Country house near Barrington Hills, Rooney’s grand mansion, is actually the Charles Dawes House, North of Chicago. This is now known as the Evanston Historical Society and is open to the public.

On the far south side of Chicago is the Pullmans Historic District and the location of where Rooney’s son, Conner, resides. As well as the warehouse in which Michael Jr. discovers his father’s line of work.

The Sullivans go to meet with Al Capone’s right-hand man, Frank Nitti, arriving in Chicago at the LaSalle Street Bridge. The modern buildings of the Chicago skyline were removed digitally for era authenticity in the movie.

During shooting there were many exterior and interiors that resided in different places, Frank Nitti’s hotel, was one of these, the exterior shot of Nitti’s hotel Lexington, was the outside of the Wrigley building on Michigan Avenue.

The interior of Nittis hotel Lexington however was a different location, for the aesthetically glamorous lobby and stairs, the Chicago Hilton and Towers was used. This location is popular and is also seen in ‘Home Alone 2: Lost in New York’ as well as ‘The Fugitive’. 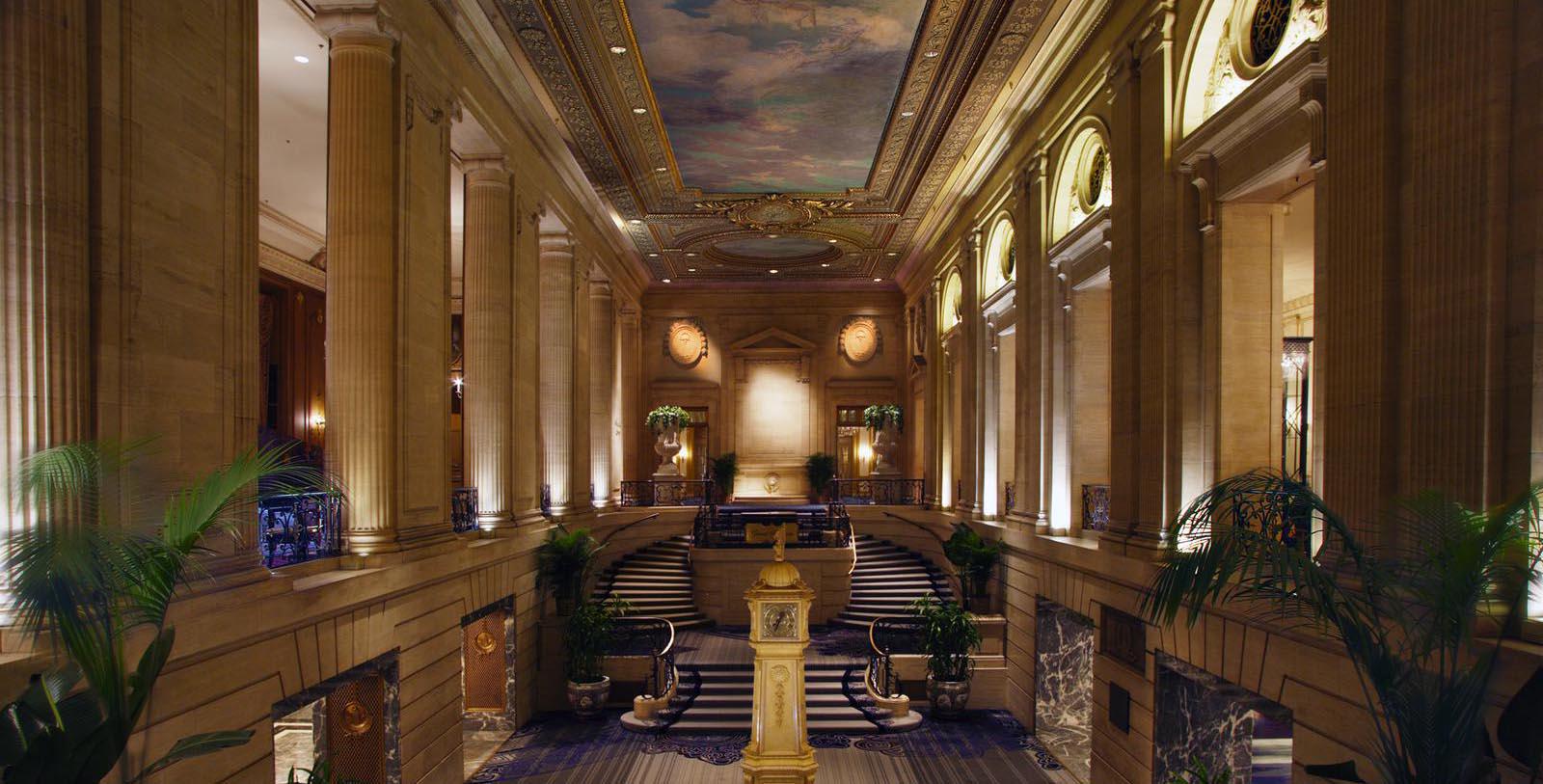 What was once known as the Salvation Army Clothing store, now from the movie known as ‘Eat More Grill’ is also in Chicago. Sine filming it became a restaurant but has since closed. We can still pass it on the street and let your mob imagination run wild.

On the road, Michael Sullivan and Michael Jr stop off at St Pauls Lutheran Church, which is located west of Beecher and South of Chicago.

Later we meet crime-scene photographer, and assassin, Maguire, who has been dispatched to track down the duo, at Englewood Diner.

The diner was actually bought on eBay after having been originally located in Peabody Square in the Boston suburb of Dorchester but was moved to open land outside of Chicago for filming.

After filming was completed the Diner was restored and sent back to its owner. It now resides at the southmost point of Maine and is named the Downeast Diner.

With Nitti protecting Connor, Sullivan decides to hit Al Capone and his organization where it hurts, the bank. And at the same time, he teaches his son to be a getaway driver. This scene was filmed in Glenwood, on the tree-lined road at Sweet Woods Forest Preserve.

Sullivan’s plan fails, as the mob withdraws their money. So, instead, Sullivan tracks down Capone’s accountant to the Geneva Hotel.

Geneva is a town south of Dundee, the Geneva hotel is a genuine location and real place, although the site did close down. This is also the location when Maguire gets a rather brutal shotgun blast to the face. Ouch!

You can’t forget the ranch. Where Michael Jr, drives him and his injured father to after Maguire fires a retaliation shot and catches Sullivan’s arm.

They meet two sweet old people at the farm, who help him to recover. This is the first time in the movie where Michael Sr and Michael Jr bond. When they leave the ranch, they give them a great deal of the stolen money.

Sullivan meets Rooney during mass in the St Sylvester church, he informs him of how his son is stealing from him.

He takes him into the crypt to inform him, but Rooney already knows his son will almost certainly be killed, if not by Sullivan then by Capone’s men, though he refuses to give up his son. Rooney urges Sullivan to flee with Michael jr. 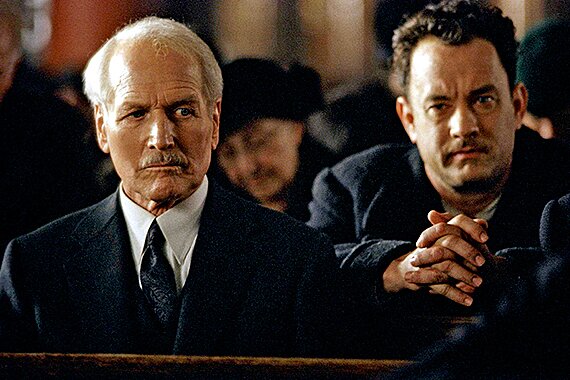 The movie was an outstanding success, taking $80 million to make and receive a box office of $181 million.

The cross between, action, drama, and mob tones, created the perfect storyline to reinvent the Gangster vision in the 21st Century.  The screenplay that made this movie is based on a series of Graphic Novels by Max Allan Collins.