The 1983 American crime drama film Scarface was directed by Brian De Palma and written by Oliver Stone. It’s a remake of the original 1932 film of the same name, and tells the story of Cuban refugee Tony Montana - played by Al Pacino - who arrives penniless in Miami in the 1980s.

Montana uses this opportunity to become one of the most powerful drug lords in the country. The film co-stars Steven Bauer, Michelle Pfeiffer, Mary Elizabeth Mastrantonio, and Robert Loggia. De Palma dedicated this version of Scarface to the writers of the original film, Howard Hawks and Ben Hecht. 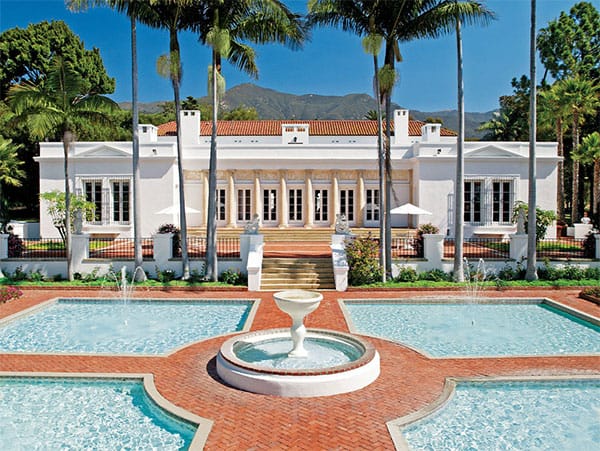 The film is set in Miami and Bolivia, and the movie’s locations are mostly divided between Florida and California.

Although the film is set in Miami, much of the film was shot in Los Angeles, as the Miami Tourist Board declined most requests to film in the city as it worried that the film would deter tourism due to its themes of drugs and gangsters.

The movie’s two lavish estates, supposedly in ‘Bolivia’ and ‘Florida’, are both in the town of Montecito, on the California coast a few miles east of Santa Barbara

One of these was the opulent El Fureidis - known also as Little Paradise or Pleasure Gardens. It’s a 10,000-square-foot (930 m2) historic estate built in 1906 on 10 acres of land in Montecito, California.

During production, filming in California was halted twice due to severe weather events in California. Production was also paused, when, in March, Pacino burned his left hand on the muzzle of the gun that had just been fired when he tripped during a fight scene, causing production to be shut down for more than a week while he recovered.

In addition to this, a premature bomb explosion also injured two stuntmen during a scene shot around this time.

Interestingly, the gunfight scene at the end of the film includes a single camera shot directed by Steven Spielberg, who happened to be visiting the set at the time.

The ‘Florida’ internment camp, where Montana wins his freedom by killing a Castro agent, was constructed and filmed under the knot of freeway interchanges at the intersection of I-10, the Santa Monica freeway, and I-110, the Harbor Freeway, downtown Los Angeles behind the New Los Angeles Convention Center.

The ‘El Paraiso’ lunch stand where Montana first works in Miami was recreated at Little Tokyo in downtown Los Angeles, which was changed to “Little Havana.”

The ‘Sun Ray Apartments’, where Montana’s brother is dismembered by chainsaw, has been revamped to become Johnny Rocket’s, 728 Ocean Drive between the Beacon and Colony hotels near 7th Street.

The luxury hotel where Montana and pal Manny Ray (Steven Bauer) take their women is the  Fontainebleau Miami Beach on 4441 Collins Avenue. The hotel also famously featured in Goldfinger, and The Bodyguard, with Whitney Houston and Kevin Costner.

Filming also briefly took place in New York. The Gothic apartment block where the intended bomb victim lives is 5 Tudor City Place at East 41st Street, which has been home to many famous characters, notably Tom Hanks in Splash! and Norman Osborn in both Spider-Man and Spider-Man 2.