The 1999 American fantasy drama film The Green Mile has become something of a family classic. The film is based on Stephen King's 1996 novel of the same name and is set against the backdrop of the Great Depression.

It was directed by Frank Darabont and stars Tom Hanks, who plays a death row corrections officer who witnesses supernatural events that coincide with the arrival of an enigmatic inmate (Michael Clarke Duncan). 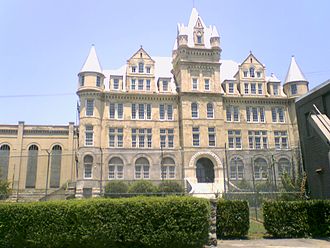 The Green Mile premiered on December 10, 1999, and was praised for its visual style and character performances, receiving positive reviews from critics. This made it a significant commercial success, and it grossed $286 million from its $60 million budget and was nominated for four Academy Awards.

The film was shot in Warner Hollywood Studios, West Hollywood, California, but also on location in Shelbyville, Tennessee, and Blowing Rock, North Carolina.

The nursing home ‘Georgia Pines’ where an aged Paul Edgecomb (Dabbs Greer) tells the story of his time as a warden on Death Row at ‘Cold Mountain Penitentiary’, is Flat Top Manor, a 20-room mansion that was built in 1901 for prosperous textile entrepreneur, Moses Cone.

It was also filmed at the old Tennessee State Prison, though the interior sets were custom built by production designer Terence Marsh, who says that the sets were designed to [give] “a sense of space” and “a sense of history.”

He also said that sets were created to provide a sense of “mystery”: “We chose the elongated cathedral-like windows because there is a very mystical element in this movie, a supernatural element [...] It presented us with lots of opportunities", he said.

Other parts of the set were less inspired by the supernatural and more by real-life, however. For example, the electric chair was a bespoke design but was inspired by real prisons across the US which have the device.

As well as featuring in The Green Mile, the penitentiary was also previously seen in Bruce Beresford’s 1996 Last Dance, with Sharon Stone, and went on to appear in James Mangold’s Walk The Line, starring Joaquin Phoenix as Johnny Cash. The abandoned building is no longer open to the public, however.

The spot where John Coffey (Michael Clarke Duncan) is discovered with the bodies of the two little girls is by the Old Train Bridge across Caney Fork River, alongside I-40, about 50 miles east of Nashville, at Buffalo Valley.

30 miles south of Nashville you’ll find the town of College Grove, home to College Grove United Methodist Church, 8568 Horton Hwy - the church where Edgecomb attends the funeral toward the end of the film.

30 miles south of here you’ll find the graveyard, which is Round Hill Cemetery, on Round Hill Road, just to the northeast of Belfast, near Lewisburg.