The Notebook is definitely a love-it-or-hate-it movie. But if you love it, you really love it. This is a romance that will get even the most stoic and emotionless to shed a tear (or at least well up). The story is tragic and heartbreaking and perfectly beautiful.

The aesthetic of the movie itself is also incredibly beautiful. Every shot is perfectly crafted to be as charming as possible. From the famous lake scene to the house that Noah builds and even the streets that are shown every now and then. The 1950s aesthetic is beautiful. So, where were all these stunning scenes filmed?

The Notebook was mostly filmed in South Carolina. The book of the same name on which the film is based is actually set in North Carolina.

But what about the scenes specifically? Here are just a few places where the most famous scenes of The Notebook were filmed.

As we’ve already mentioned, The Notebook takes place in the fictional town of Seabrook.

The scenes for Seabrook were filmed in Old Village, Mount Pleasant. This is a very classic and traditional Southern district in South Carolina. 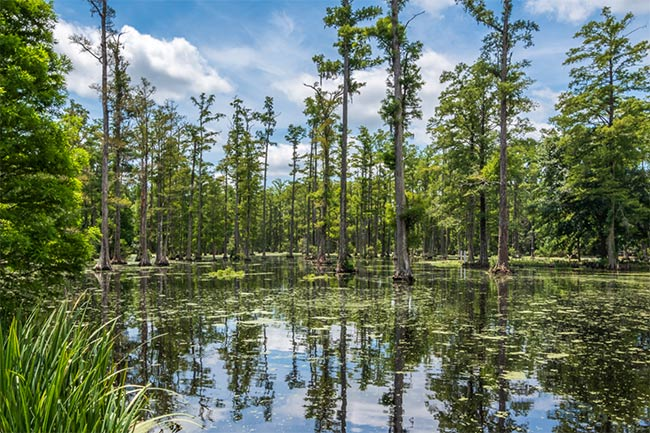 This scene is perhaps the most famous of all of the romantic moments in The Notebook. It is one of the few peaceful and genuinely happy and romantic moments in the movie. So it is easy to remember. It was filmed in a place called Cypress Gardens near Charleston in South Carolina.

The lake that is supposed to be behind Noah’s house is actually several miles away. But that doesn’t ruin the effect.

Cypress Gardens is a public park with rowing boats available for visitors. So you will be able to take your very own Allie and Noah boat ride.

The house that Noah repairs and builds is iconic. The production team originally considered finding a dilapidated house and actually renovating it. This would allow the house to gradually become repaired and built along with the narrative.

So, instead of using an already rundown house, they used a house on what was historically known as the Bears Bluff Plantation. This is located on Wadmalaw Island in South Carolina. The house was made to look derelict when it needed to be. The finished result of Noah’s work is how the house actually looks.

Like the building used for Noah’s house, the Hamilton summer home is also a former plantation. This building is known as the Boone Hall Plantation. This house is also open to the public for tours.

However, it is important to remember that the lands of these plantations were once worked by slaves. So a level of respect and an acknowledgment of its origins is necessary if you visit with the intention of reminiscing about The Notebook. 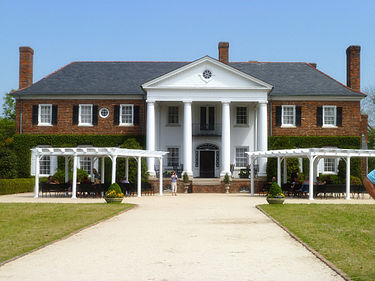 Although the exterior of the Hamilton family’s summer house is filmed at the Boone Hall Plantation, the interiors were filmed at the Williams Mansion. This is another very large and impressive building in Charleston.

The building was originally built for a man named George W. Williams. But the name Calhoun Mansion comes from Williams’ son-in-law Patrick Calhoun who inherited the property. It is most famously known as the Calhoun Mansion but is also referred to as the Williams Mansion.

This is the preferred name of the current owners (it is also open to the public) likely due to the connotations that the Calhoun name has with slavery. As Patrick Calhoun’s grandfather was John C. Calhoun, a staunch supporter of slavery.

Allie and Noah’s first date is another iconic moment. It is sweet and awkward (in stark contrast to the rest of their relationship). The movie theater used is an iconic and traditional theater. The theater used was a real theater built in the 1940s. So it was perfect for the movie.

The theater no longer shows movies but can be hired out as a private event space. Or, you can request that messages can be spelled out on the front of the marquee. So you can send a (very public) message to your sweetheart or crush right where Allie and Noah had their first date.

It is outside this theater that the famous scene where Noah and Allie lie down in the road takes place. This is one scene where something more modern had to be brought in to update the area. (It’s much more common for modern features to be removed to fit an older style).

The traffic light that Noah and Allie stare at while lying in the road had to be brought in as the street doesn’t actually have any traffic lights in real life. 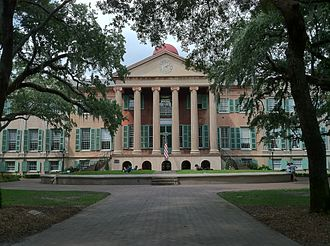 In The Notebook, Allie attends Sarah Lawrence College in New York. But even these scenes were filmed in South Carolina.

In the College of Charleston, to be exact. So, it was still a red brick university. Just not the one you might have thought.

This nursing home is actually shot at another plantation. This estate is known as the Rice Hope (Black River) Plantation.