The Shootist, released in 76, is an incredibly meta swang song movie. It featured gunslinging J.B.Books on his last limbs, looking for a quick and honorable way out before terminal cancer could render him an undignified husk of the man he once was.

The symmetrization of John Wayne and his character, Books, is unmistakable. Not only did Wayne and the portrayed share an illness, but a departure too.

The Shootist was the last film John Wayne starred in before his death from reoccurring cancer in 79, just three years after The Shootist was released. This was John Wayne’s goodbye to the world, both as the persona we’d come to love and revere on screen, and as his true self.

The synonymy between actor and character make The Shootist all the more enveloping and immersive. You feel you’ve known Books your entire life because you’ve grown up watching Wayne. You feel you’re traveling with him, staying in the dusty boarding house, a character yourself in the movie. 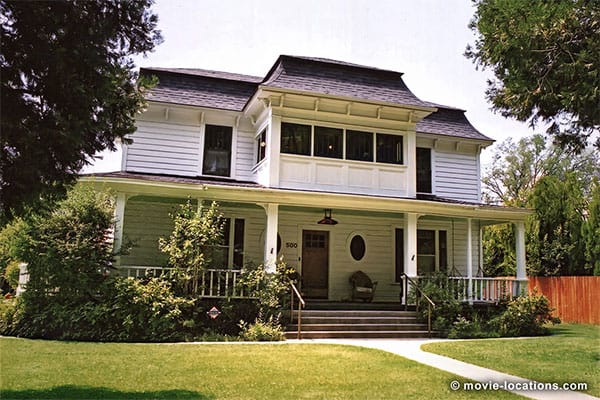 But Where is Exactly Does this Tragic Tale Play Out?

In quintessential Western form, The Shootist was pegged to be set and shot on location in El Paso, Texas, but Wayne himself – contractually admitted to amend the script – requested the setting be changed entirely to Carson City, Nevada, east of Lake Tahoe on 1-395.

All the vast butter-yellow prairies threaded with barren twists of trees and cuffed with clambering mountain ranges are found in Carson City, but it wasn’t the only location.

Almost every street or internal shot was filmed in Burbank, California, on the Western Steet of Warner Bros’ backlot and surrounding sound stages.

One exception to the indoor studio sets is Bond Roger’s boarding house where Books tries and fails to live out his dwindling days anonymously.

In reality, this building is the 1914 Krebs-Peterson house on 500 Mountain Street, situated on the picturesque plains of the historic district beyond the spur of the Carson Range. Now a private home on Carson City’s Blue Line Trail, it was built initially as a home for Dr. Enerst T Krebs, Sr.

Production did briefly break the Carson City border in order to film the buggy ride scene. They decided that Washoe Lake, Washoe valley, 4855 East Lake Boulevard, equidistant from Reno and Carson was the luscious backdrop they had imagined.

Unlike most films that end up as an ideal mosaic of locations tiled seamlessly together, The Shooter was fairly honest in its representation of place.

If it weren’t for Wayne’s early revisions, it would have been a vastly different movie, visually.