Skip to content
If you’re a fan of action-packed films that showcase the American army, and in particular the US Naval Aviator Force (because, who doesn’t want to see pilots take off from ships, right?) then Top Gun is a movie that you simply cannot miss out on.

Released in 1986 and directed by Tony Scott, it stars some truly iconic names within the acting world, such as none other than Tom Cruise, who plays the main role of LT Pete “Maverick” Mitchell. As well as the stunning Kelly McGillis as the main female role.

Top Gun has gone down in history as one of the most iconic naval aviator films, and it has given us some memorable lines such as “I feel the need, the need for speed”, which you might have heard repeatedly from film fanatics around the world. And honestly, even if aviator films aren’t fully your thing, this movie is a true masterpiece and deserves to be seen at least once in your lifetime.

It’s worth it for Tom Cruise’s amazing acting alone!

But anyway, since Top Gun is such an iconic and well-known film, many of you will be wanting to visit the different locations where it takes place, right? So, where exactly was Top Gun filmed?

The movie is set in the city of San Diego, which is home to the 11th Naval District HeadQuarters, and where one of the world’s largest navy bases is. Located on Route 5, around 120 miles south of Los Angeles. It is called the Fighter Weapons School by the Navy, and the flyers call it Top Gun, which is where the title for the movie comes from.

And, in fact, the TOPGUN base (yup, it’s actually one word in real life, but that would have looked odd for the film),  is the Marine Corps Air Station Miramar, in San Diego. You can even tour the facility nowadays, so you can go and take a peek and pretend you’re in the film yourself! TOPGUN base facility, which you can visit and tour nowadays

The Miramar station is used for a lot of the filming, and the scene in which Maverick and Goose embarrass their instruction with their rendition of “You’ve Lost That Lovin’ Feelin’”, which is one of the most iconic, is said to have been filmed within the Miramar Officers Club, in MCAS Miramar, at Building 4472, Anderson Avenue (San Diego).

The control tower that is buzzed by Maverick in the movie is located at Fallon, in Nevada, and almost all of the aerial footage used for Top Gun was shot there.

If you’re wondering exactly how they shot so many amazing aerial scenes from the Fallon Naval Air Station, we can tell you that they used a combination of ground-mounted cameras and air shots. The air-to-air shots were done with a Learjet, piloted by Clay Lacy who is the Astrovision inventor and a legendary pilot. 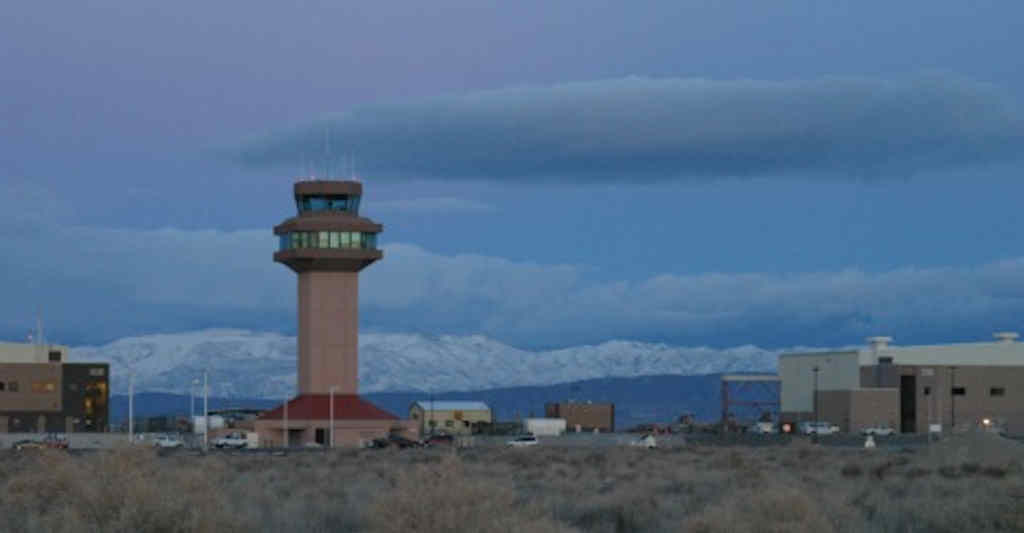 Fallon Naval Air Station, where the control tower is located

One of the aerial scenes from Top Gun, shot from the Fallon Naval Air Station

As for the flyer’s hangout, where the main characters relax and have some fun, and where Maverick finally hooks up with Charlie, it was filmed in the Kansas City BBQ, situated at Kettner Boulevard in downtown San Diego.

This bar proudly celebrated its role in the movie, and is actually nowadays known as the “Top Gun Bar”, something which they self-proclaim themselves with pride!

You can visit the bat and enjoy an immersive Top Gun experience, so we definitely recommend you going there, if you can, after watching the movie! 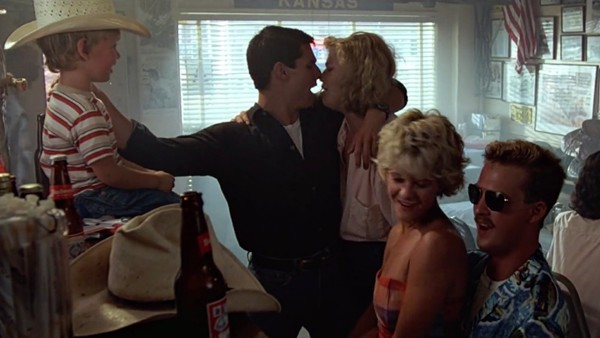 A scene from Top Gun, filmed at the Kansas City BBQ bar (aka, the Top Gun bar)